Pope Benedict is fighting the worst crisis of his papacy, but his problems are only the latest in a long history of controversies and intrigue in the headquarters of the Roman Catholic Church. 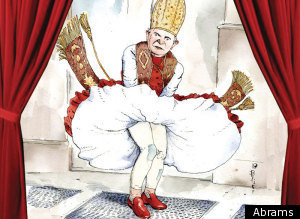 The “Vatileaks” scandal, in which the pope’s private papers are alleged to have been pilfered by his own butler, pales in comparison to the scandals of centuries past when popes were accused of violence, nepotism and sexual excesses.

Pope Benedict has angrily charged that “totally gratuitous” accounts in the media “offer an image of the Holy See which does not correspond to reality.”

Archbishop Angelo Becciu, the third-ranking official in the world’s smallest state, bemoaned the “distorted image” presented of the Vatican and said the internal debates revealed by the documents were perfectly normal in any organization.

“We are not mummies,” he said with the kind of historical allusion that seems to come naturally in the corridors of the world’s oldest continually operating institution.

But the allegations have caused a sensation round the world and defied Vatican attempts to play down their importance.

Italian newspapers have devoted pages and pages to the crisis, often with graphics showing the exact layout of the pope’s apartment or a bird’s-eye view of Vatican City, although written reports have often been highly speculative in the face of the Holy See’s deep secrecy.

Although it is rare, leaking confidential documents is nothing new. Secret papers from the First Vatican Council of 1869-1870, which defined the doctrine of papal infallibility, ended up in German newspapers.

The privacy of the pope’s own apartment has also been violated before. In 1958, papal doctor Riccardo Galeazzi-Lisi managed to snap pictures of Pope Pius XII on his deathbed and sell them to gossip magazines in Italy.

“I was not surprised at all when I heard about it,” Frank Coppa, a Church historian at St John’s University in New York, said about the “Vatileaks” scandal.

Intrigue seems encouraged by the Vatican’s organizational model, which borrowed from Renaissance royal courts and shields its inner workings from outside scrutiny.

A remnant of the time when the popes were also temporal rulers over Rome and parts of Italy, the tiny city-state is headquarters for the 1.2-billion-strong Roman Catholic Church, the world’s largest. As the Catholic saying goes, “the Church is not a democracy.”

“The Vatican has an unmatched capacity to draw a veil of secrecy over its doings,” said Thomas F.X. Noble, a papal history expert at Notre Dame University in Indiana.

“It lacks the kind of transparency that we associate with government and corporations in the modern world.”

A case in point is the Vatican newspaper L’Osservatore Romano, which – despite recent progress in embracing the Internet and livening up its drab format – waited almost a week before mentioning that papal butler Paolo Gabriele had been arrested for stealing documents that allege corruption in awarding infrastructure contracts.

In recent decades, the culture of secrecy helped mask the clerical sexual abuse of minors and the quiet reassignment of predator priests. It has also prompted charges that the Vatican bank laundered money and secretly funded projects abroad.

But all this is nothing compared to more ancient scandals.

In the 15th and 16th centuries, the Renaissance popes bribed their way into office, openly kept mistresses and families and appointed young nephews as cardinals.

He came from the notorious Borgia family, who have been accused of adultery, rape, incest and murder. Alexander is said to have died from eating a poisoned apple.

Sixtus IV built the Sistine Chapel and the Vatican archives during his 1471-1484 pontificate, but also made six of his nephews cardinals and was involved in a murder plot.

One of the nephews, Julius II, was patron to renowned artists such as Michelangelo and Raphael between 1503 and 1513 and commissioned St Peter’s Basilica.

But the budgetary wizardry he used to finance it backfired disastrously. He raised funds by selling indulgences to reduce punishment for sinners, a practice that so shocked Martin Luther that he broke with Rome and launched the Protestant Reformation.