Today’s Washington Post reports on a highly troubling story (Arlington Diocese parishioners question need for fidelity oath) about a rising trend in Catholic dioceses to require workers — including volunteers who teach religious education — to affirm some sort of “fidelity oath” in order to continue their work or ministry. The story ends with this:

The Rev. Ronald Nuzzi, who heads the leadership program for Catholic educators at the University of Notre Dame, said many bishops “are in a pickle.” They want Catholic institutions to be staffed by people who not only teach what the church teaches but whose “whole life will bear witness.”

Nuzzi said he keeps a photo on his desk from the 1940s that shows all the German bishops in their garb, doing the Nazi salute.

“I keep it there to remind people who say to do everything the Church says, that their wisdom has limitations, too.” 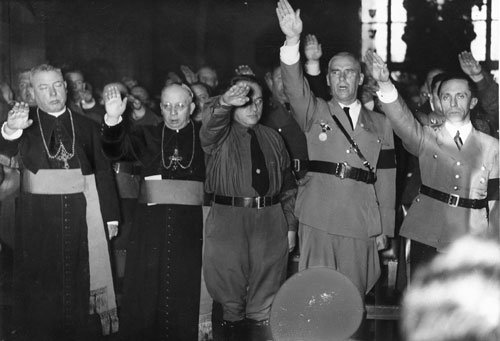 Anyone who fully understands and values the breadth and depth of Catholic Christianity must be appalled by this trend, especially when such oaths appear to be written in ways that clearly are contrary to Catholic teaching. What is more troubling, however, is the perspective expressed by some — both clergy and laity — who see no problem with such a practice.