Bishop Patricia Fresen says she dreams of establishing a church in which people of all genders, races and sexual orientations are treated equally and allowed to assume positions of leadership. 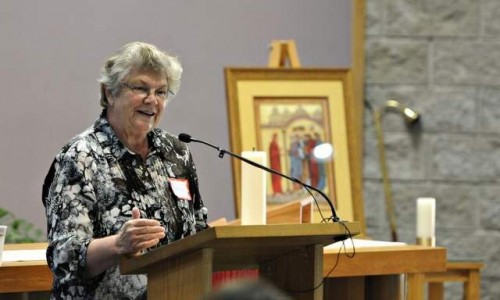 Fresen, a leader of the Roman Catholic Womenpriest Movement, spoke Sunday to members of the Mary Magdalene First Apostle Church about the need for an all-inclusive church after Mass at St. John’s Episcopal Church.

“There needs to be an emphasis on what unites us, rather than what divides us,” she said.

Fresen’s story
Born and raised in South Africa, Fresen was a nun in the Dominican Sisterhood for 45 years. She taught at St. John Vianney Seminary in Pretoria, South Africa, and at St. Augustine’s University in Johannesburg.

In 2003, Fresen was ordained a priest, which is a role the Roman Catholic Church reserves solely for men. As a result, she was excommunicated from the church and forced to leave her teaching positions.

Two years later, she was appointed a bishop and has been instrumental in bringing what supporters call the Womenpriest Movement to the United States. It is not recognized by the Catholic Church.

The Womenpriest Movement has support but there is still resistance, Fresen said.

“The resistance comes from a great fear of women and sexuality, and the long patriarchal tradition of the Roman Catholic Church,” she said.

Structure
Fresen said members of the Womenpriest Movement still consider themselves Catholic, but there are fundamental differences in how the churches are structured.

Each region is led by a bishop, administrator and program director who are all elected by the people, Fresen said. The administrator is the main position in charge while the bishop has pastoral responsibilities and guides priests and deacons.

The second main difference between the churches is that women are allowed to hold leadership positions and nearly all the women involved in the Womenpriest Movement are married. Fresen said celibacy is not a requirement of ordination and neither is a vow of obedience to the bishop.

Fresen said the Womenpriest Movement advocates showing mutual respect for all religions, and expressing different cultures through liturgy and music.

Regina Nicolosi, bishop of the Midwest region of Roman Catholic Womenpriests, said it is important to her to spread the message of the movement because she believes in total equality for men and women.

Nicolosi said the law that does not allow women to be ordained as priests in the Roman Catholic Church is unjust, and she feels a strong call to advocate against the law.

“Being part of the Womenpriest Movement has helped me answer that call,” she said. “I want to belong to a church that is accepting of all races, all genders, all sexual orientations and takes that very seriously.”

Fresen said she uses humor to cope with the unjust structures of the Roman Catholic Church, and if the Womenpriest Movement is strong in its beliefs, “the church will back down, like a bully usually does.”

Fresen told audience members they must lose all fear of excommunication if the Womenpriest Movement is to be successful. She cited Nelson Mandela as an example of someone who spent 27 years in prison because he refused to obey what he considered an unjust law.

“In good conscience, one must not obey an unjust law … but you must be prepared to pay the price,” Fresen said.

2 Replies to “Female bishop speaks up for views, talks about ‘Womenpriest Movement’”