Citing the sex-abuse scandals in the Roman Catholic Archdiocese of Philadelphia and at Pennsylvania State University, the Orthodox Church in America has dismissed its presiding archbishop for failing to remove a priest who had raped a woman and been jailed for other violent acts. 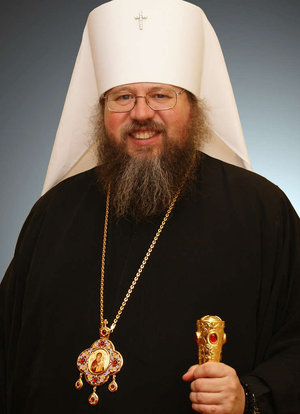 The Holy Synod of the church, whose members number about 85,000 in the United States and Canada, announced this week that Metropolitan Jonah, 52, had stepped down Saturday after ignoring the church’s procedures for responding to sexual misconduct.

“Metropolitan Jonah has repeatedly refused to act with prudence, in concert with his fellow bishops, in accordance with the Holy Synod’s policies,” the synod said in a statement.

“In light of the recent widely publicized criminal cases involving sexual abuse at Penn State and in the Philadelphia Archdiocese and the Kansas City Diocese of the Roman Catholic Church, the extent of the risk of liability to which Metropolitan Jonah has exposed the church cannot be overstated,” it said.

Church leaders say they are cooperating with law enforcement and investigating the rape allegation. The Rev. Erik Possi, a synod spokesman, said Tuesday the church was not releasing the accused priest’s name.

There are 36 parishes in the Diocese of Eastern Pennsylvania, which comprises half the state, and about 2,000 members in the Philadelphia area.

Born James Paffhausen in Chicago, Jonah converted to Orthodoxy from Episcopalianism at 18 and was ordained a priest in 1994. He was made a bishop in early 2008, when he took the name Jonah, and was elected primate, or presiding archbishop, later that year. He was the first convert to head the OCA, which is based on Long Island.

“At some time after his enthronement as our primate, Metropolitan Jonah unilaterally accepted into the OCA a priest known to him and others to be . . . severely abusing alcohol, which more than once was coupled with episodes of violence and threats toward women,” the synod said.

These episodes included the “discharge of a firearm” and the “brandishing of a knife,” which led to the man’s arrest. In 2010, he was alleged “to have committed a rape against a woman.”

Although informed of the rape allegation in February, Jonah “neither investigated, nor told his brother bishops,” and did not report the incident to police or church lawyers, according to the synod.

When the woman reported her alleged rape to police, however, she and a family member were admonished by unnamed church officials “that their salvation depended on their silence.”

As recently as last week, the synod reported Monday, Jonah was “regularly communicating” with the person who was instructing the woman to keep quiet.

Furthermore, it said, Jonah first encouraged the priest to pursue a military chaplaincy “without informing the military recruiter of any of the priest’s problems,” and then allowed the man to enter another Orthodox jurisdiction while assuring it there were “no canonical impediments” to a transfer.

Church law calls for a new metropolitan to be elected within 90 days, but Possi said there were “many steps that must be taken” and indicated that it could be longer.

While the bishops and archbishops of many Roman Catholic dioceses have been accused of covering up clergy sex abuse, only Cardinal Bernard Law of Boston and Bishop Manuel Moreno of Tucson, Ariz., have resigned for that reason.

On Tuesday, a Philadelphia Common Pleas Court judge is scheduled to sentence Msgr. William J. Lynn, former head of the archdiocesan clergy office. Last month, Lynn, 61, was found guilty of felonious child endangerment for his 12-year role in recommending the assignments of priests whom prosecutors said he knew to be child abusers.

Jonah’s resignation is not the first scandal to mar his church in recent years.

In 2005, the OCA’s former treasurer, Protodeacon Eric Wheeler, accused the administration of spending millions of dollars in church assets for personal use or to mask deficits in church accounts.

According to some reports, Jonah was elected primate three years later because, as the newest bishop, he was untainted by financial scandal.