Since the Vatican’s public release April 18 of the results of the doctrinal assessment of the Leadership Conference of Women Religious, many American Catholics have been confused and angry. These women, who work tirelessly with the poor and marginalized, whom many of us see as embodying Christ’s love, are being accused of doing grave harm to the church. In conversation after conversation, I have heard, “Why so much anger directed at women religious?”, “What is this about?” and “It just seems … abusive.” As I pondered this last observation, I recognized a familiar dynamic. 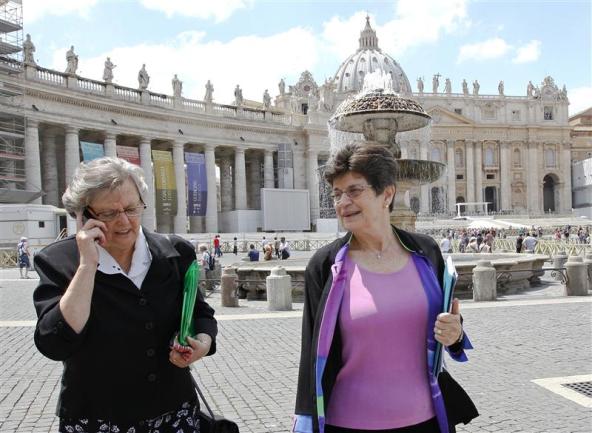 For nearly eight years I worked as a psychologist at a treatment center for priests and religious. During that time I worked with a number of men who had committed sexual abuse. An essential part of the therapeutic work was for these men to understand the deep pain they had caused, to accept responsibility for it, and to move forward with a commitment not to let it happen again, which included accepting restrictions and consequences. Often the largest obstacle to healing was the first task: accepting and understanding the amount of pain they had caused.

When we harm someone, healing requires that we recognize the extent of the injury we caused. Only when we are able to see this clearly and take responsibility for it can we respond with appropriate guilt. Appropriate guilt focuses us on how to repair the injury (if that is possible) and what actions we must take to prevent it from occurring again. If we cannot recognize the pain and take responsibility for it, we get stuck and assume an aggressively defensive stance, lashing out and blaming others as a way to deflect attention from our actions, actions we find too painful to look at honestly.

In treatment, when a client was stuck in this way, we would see this blaming/lashing-out dynamic, and he would start a fight. The greater the unacknowledged pain, the more furious the fight. Often the fury was directed toward a bishop or superior who was removing him from ministry. “You’re ruining my life,” he would say. “I feel betrayed. You have no idea how much pain you are causing me and you don’t even care.” Although he was the abuser, in his mind in that moment, he was the victim of the bishop or superior. The real victim had vanished from his awareness.

Fights like these were so provocative that the instinctive reaction of those on the receiving end was to respond with their own aggression. So the fight would escalate, take on more heat, and distract from the work at hand. As therapists, we tried to contain these fights and give them as little energy as possible (like depriving a fire of oxygen). Our job was to say, “This is a distraction. Let’s get back to work.” Then we would support the client in leaving the fight behind and returning to his unfinished work: looking deeply at his own pain, taking responsibility for the pain he had caused, and taking action to prevent it from occurring again.

I see strong parallels between this and the church’s dealings with LCWR. The level of anger and blame in the doctrinal assessment document feels like someone is picking a fight, and the intensity of it hints at the enormous amount of still unworked pain at the heart of the church’s sexual abuse crisis. To me, this fight looks like a distraction.

In the past 10 years, the church has taken steps toward responding to the tragedy of sexual abuse in the church at the individual level, including responding to allegations more quickly, involving law enforcement, and developing child protection policies. However, the church has not yet been willing or able to examine its own role as an institution in concealing and enabling decades of abuse. The bishops have not taken collective responsibility for their actions (and inactions) and for the enormous pain they have caused. As much as the abuse itself, it is this failure by the hierarchy to acknowledge and accept their responsibility that has angered and disillusioned so many current and now-former Catholics. Too much pain is still unacknowledged and unworked.

The church hierarchy seems to be stuck and they are blaming and lashing out. They have started a fight with LCWR and the women religious. In the doctrinal assessment, they have accused the women of the church of betraying the core values of the church, of causing scandal and leading the faithful astray, and of not being sufficiently trustworthy to reform themselves. They have ordered the women to be closely supervised. These accusations seem more rightly to belong to the sexual abuse scandal rather than to the actions of LCWR. It was the bishops who, by protecting sexual abusers, betrayed core values of the church and caused scandal to the faithful. It is the institutional church that appears not to be able to reform itself and to be in need of outside supervision.

This fight with LCWR is a distraction from the work the bishops still need to do in order to bring about genuine healing in the church.

In response to the misdirected accusations and the severe punishment directed at LCWR, many Catholics feel outraged and want to fight back. But as we saw above, to do so stokes the fire and continues the distraction. We can all be grateful to the women of LCWR for their powerful model of non-reactivity and reflection in their response to this situation. They have spoken their truth, but have not thrown wood on the fire. Similarly, public statements of support from men religious — notably the Franciscans — are courageous and direct but nonviolent. I hope that all of us will follow their lead — speaking our truth with courage and nonviolence, and, like the sisters, keeping our eyes on the real work we are called to do as a church.

It seems the moment to say clearly to the Vatican and to the bishops, “This fight with LCWR is a distraction. The women are not to blame. The church is not the victim. There is still a great deal of pain to address. Let’s get back to work.” Let us hope that with our prayers and support they will be able to look more deeply. Let us hope they can return to and complete the work that is still theirs to do, and in that way bring about healing and transformation for themselves and for our entire church.