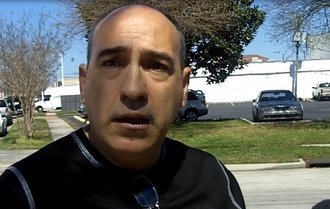 He had admitted to pleasuring himself, saying he finds it a thrill to do so in public, but denied exposing his penis. However, a nanny who was bringing children to the park for a picnic said she observed the exposure when she got out of her vehicle, parked next to his.

Shortly after his arrest, Storms had held a press conference, saying the Jefferson Parish sheriff’s deputies who arrested him were “maniacal” and “coercive.” But he also acknowledged he had viewed pornography that day and said, “I apologize deeply for my inappropriate, sinful actions.”

After finding Storms guilty, Judge Ross LaDart of the 24th Judicial District Court sentenced him to three years’ probation and ordered an evaluation, apparently to determine his mental health, the Times-Picayune reports.

In 2003, Storms, who has called himself a “Christian patriot,” made news when he led his small church congregation through New Orleans’s French Quarter to protest Southern Decadence, a gay festival held every Labor Day weekend. He railed against LGBT people as well as the city of New Orleans, which he called a “prostitute” for allowing the event. A local merchants’ association went to court for a restraining order to prevent Storms and his followers from using bullhorns. Storms has since apologized for the protest.