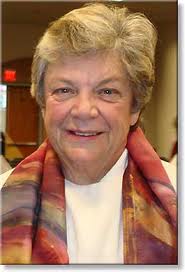 She’s no stranger to working the outskirts.

Raised “a proper white South African,” Fresen was stunned upon entering her convent after matriculation (and years of segregation), greeted by 55 women ​— ​15 of them black. “I didn’t know it would be racially mixed,” she says now. “It never occurred to me. But I became colorblind.”

That journey would prove significant. After university, Fresen ​— ​in Santa Barbara last week to teach a workshop at La Casa de Maria ​—  worked in the city of Welkom as principal of a school for whites. But by the 1970s, Fresen remembered she and her fellow Dominicans began thinking, “Something’s wrong; we can’t go on like this.”

Apartheid was law by then, but a debate — ​that would prove a theme of Fresen’s life ​— ​ensued. On one side were those who said they couldn’t change apartheid: “The law must change first,” Fresen recounted. She said the others believed, “We mustn’t follow an unjust law; we must follow our conscience.” Their bishop, Denis Hurley, agreed with the latter group. It was risky and illegal, but he believed breaking the law was the only way it would change.

Essentially ignored by the police, they had some wiggle room to plot. Bishop Hurley challenged the principals to bring black students into their schools. They spent a year preparing ​— ​ensuring white students’ families were comfortable, reaching out to black families, teaching black children English ​— ​all while keeping it out of the papers to hold trouble at bay, relying instead on the African drum to spread the word.

On the first day of school, Fresen was overcome watching the children ​— ​black, white, all in the same uniform ​— ​streaming in. But before the goosebumps could dissolve, the hairs on the back of her neck stood up: She heard the stomping of police boots approaching her office. They gave her a week to get in line.

One week later, they took her to prison. Not one child was sent away; today the school is flourishing.

Years later, after receiving her doctorate in theology in Rome, Fresen began teaching seminary ​— ​teaching men to be priests ​— ​in Pretoria. And a longing to be a Catholic priest herself began to nag. She shushed it as best she could, telling herself, “Don’t be stupid.”

In 2002, while teaching at Johannesburg’s Catholic university, she heard about the Danube Seven ​— ​seven women who were ordained Catholic priests on Germany’s Danube river. Two months later, fate intervened: Fresen was sent to Germany for a weeklong course. She spent a day with two of those women; they asked if she felt called to the priesthood. She said yes. They rendezvoused in Barcelona on August 7, 2003 (nine years to the day of our interview); Fresen was ordained.

And then, all hell broke loose. Her parish phoned the Vatican; the cardinal ordered her to recant. Or, he said, leave.

Heartbroken and staggered, she left. She lost her job, her congregation, her family, and moved to Germany.

She’s also been excommunicated. While in St. Louis performing an ordination (in a borrowed sacred space where these clandestine events take place: this time a Jewish synagogue), Cardinal Raymond Burke sent a cadre of “spies,” with cameras. (He followed up, excommunicating any identifiable participants.) Someone handed Fresen an envelope (she thought it might be a check): inside, a summons. She ignored it. Three weeks later, the mail carrier delivered an official decree of excommunication, “with my name beautifully written,” she says, eyes shining.

As for the big question ​— ​why stay? ​— ​Fresen says she believes there are two churches: the hierarchy and the people. She believes the people, the ones who want reform ​— ​the separation of celibacy and priesthood, the ordination of women ​— ​are reaching a critical mass. And this: “If I left, nothing would change. The hierarchy would take no more notice of us. We can only make change if we stay, so we are not going away.”