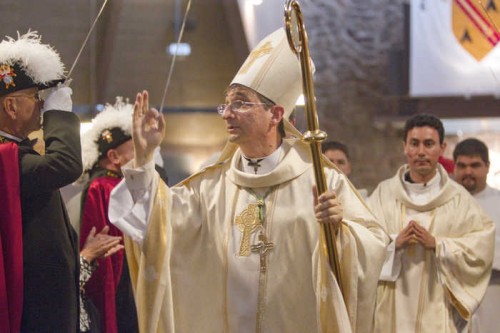 At issue is a story I reported yesterday: Yakima bishop Joseph Tyson sent a letter this month instructing all priests in his diocese to begin a fundraising drive inside their parishes that directly funds the anti-gay-marriage PAC Preserve Marriage Washington, which is trying to reject Referendum 74 on the fall ballot. While I lamented that Tyson’s effort seems to comply with federal tax rules, it may not be legal under state law.

Here’s why: The church can’t act as an agent that collects money and sends it to the campaign. In his letter, Bishop Tyson asks the priests to circulate Preserve Marriage Washington’s fundraising envelopes among pews, collect the checks, and mail all the checks to the anti-gay PAC. As he put it, “Please place unopened envelopes into the addressed security envelope, and mail them to Preserve Marriage Washington.”

That sort of activity is informally called “bundling,” Anderson explains, and it would violate a state law that concerns collecting contributions on anther’s behalf. “A person, other than an individual, may not be an intermediary or an agent for a contribution,” says the RCW.

“They can hand out those envelopes,” Anderson says, “but they that can’t collect them and send them in.” Anderson says that election workers will try to “head them off at the pass and see that they are complying.”

Bishop Tyson did not respond to a request for comment.