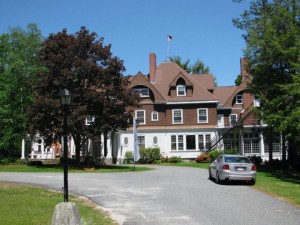 Dianne Williamson, a columnist for Massachusetts’ Worcester Telegram, reports that when a gay couple offered to buy a mansion for sale from the Diocese of Worcester, they were rejected as buyers. A mistakenly forwarded email to the couple reveals that the diocese was concerned that the new owners might use the building to host gay weddings. Moreover, a diocesan official has been caught in a lie to the newspaper about why the diocese refused the sale.

“It’s bad enough that the Catholic Church discriminates against gay people. But it’s poor form — and possibly illegal — to document the bigotry and then mistakenly email it to the victims.

“This embarrassing etiquette lapse occurred as James Fairbanks and Alain Beret were pursuing the purchase of Oakhurst, a 44-bedroom mansion in Northbridge, owned by the Diocese of Worcester. Fairbanks and Beret had searched for two years for the perfect renovation project, and hoped to turn the run-down estate into a banquet facility. Previously, the pair had transformed mansions in Vermont and Barre into similar businesses.”

The diocese originally seemed very happy to sell the building, going so far as to suggest a lower bid because of renovations that had been done. But after they rejected the deal which was in progress, Williamson called a diocesan official to get an explanation:

“This week, Monsignor Thomas Sullivan, who oversees the sale of diocesan property, told me the deal fell through because of financing.

“ ‘They couldn’t come up with the money,’ he said. ‘This happens all the time.’

“I told him the potential buyers believed that he rejected the deal because of their sexual orientation, or the prospect of gay marriages someday being performed at Oakhurst. Was that an issue?

“ ‘No, it wasn’t,’ Msgr. Sullivan said. ‘It was an issue of them not having the financing. That was all.’

“As noted, if you’re going to discriminate, you should cover your tracks. Inadvertently attached to the email rejecting the counter offer is an email from Msgr. Sullivan to the diocesan broker:

‘I just went down the hall and discussed it with the bishop,’ Msgr. Sullivan wrote. ‘Because of the potentiality of gay marriages there, something you shared with us yesterday, we are not interested in going forward with these buyers. I think they’re shaky anyway. So, just tell them that we will not accept their revised plan and the Diocese is making new plans for the property. You find the language.’ ”

Fairbanks and Beret are now planning to sue the diocese; in Massachusetts it is illegal to refuse to sell because of a purchaser’s sexual orientation.

An added wrinkle in this story is that the Oakhurst mansion had previously been used as a treatment center for pedophile priests, but had been closed because of allegations of sexual abuse and financial mismanagement:

“Speaking of reprehensible, Oakhurst is perhaps best known as the former House of Affirmation, a treatment home for pedophile priests, which closed amid scandal in the late 1980s. Ironically, Beret was willing to overlook that history; he’s a devout Christian who at one time studied for the priesthood.

“ ‘I have plenty of sins,’ Beret said. ‘But being gay isn’t one of them. This is not a fight I wanted to pick. But for the sake of my dignity, I’m not walking away.’ ”