The ordination of Rev. Angel Perez in 2002 was significant for two reasons: He was the rare Mexico native among priests in Oregon and, in a year when the Catholic Church sex abuse scandals were making national news, he was the rare priest ordained period in the state. 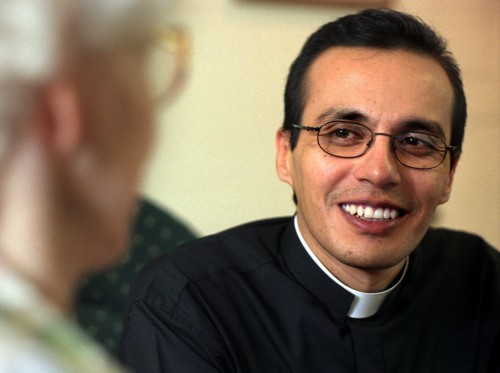 A decade ago, Oregonian reporter Shelby Oppel wrote a profile of Perez that described his ascent from a seminary student in Mexico to the archdiocese in Portland. The piece, which follows in its entirety, was published on the front page on Aug. 5, 2002.

On Monday, Perez, now the parish priest at Saint Luke Catholic Church in Woodburn, was arrested after police responded to a complaint at about 1:30 a.m. Monday alleging inappropriate contact between the priest and a 12-year-old boy.
He faces accusations of sexual abuse, use of a child in a display of sexually explicit conduct and furnishing alcohol to a minor. Perez, 46, was booked into Marion County Jail Monday evening and remains held without bail. He is scheduled to be arraigned at 3 p.m. in Marion County Circuit Court, according to the jail.

Perez is only the second priest to face criminal charges in Oregon since 1983, when the Rev. Thomas Laughlin was convicted of molesting two boys in Multnomah County.