The U.S. Catholic bishops’ point man on sexual abuse has said that the hierarchy’s credibility on fixing the problem is “shredded” and that the situation is comparable to the Reformation, when “the episcopacy, the regular clergy, even the papacy were discredited.” 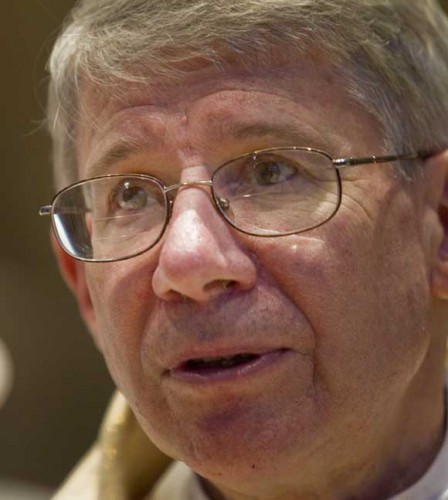 Bishop R. Daniel Conlon of Joliet, Ill., last month told a conference of staffers who oversee child safety programs in American dioceses that he had always assumed that consistently implementing the bishops’ policies on child protection, “coupled with some decent publicity, would turn public opinion around.”

“I now know this was an illusion,” Conlon, chairman of the bishops’ Committee for the Protection of Children and Young People, said in an address on Aug. 13 to the National Safe Environment and Victim Assistance Coordinators Leadership Conference in Omaha, Neb.

His talk was published in the Aug. 30 edition of Origins, an affiliate of Catholic News Service.

Conlon said that the conviction of a high-ranking church official in Philadelphia for covering up clergy abuse and the upcoming trial of a bishop in Missouri on charges of failing to report a priest on suspicions of child abuse have contributed to a widespread impression that the bishops “have failed to keep their commitments.”

The bishop disputed that view, but said even close friends “turned almost hostile” over dinner recently when he said the hierarchy has adopted “an entirely different spirit of openness and accountability.”

Conlon told the conference that the bishops still needed to clarify emerging questions about how to deal with issues like child pornography and “boundary violations” in which church personnel might engage in inappropriate interactions with children that don’t yet cross the line into physical abuse.

But he said that the bottom line is that the bishops “are gravely weakened and in need of assistance” in developing policies and changing public perceptions. He told the child safety workers to think of themselves “as an extension of your bishop.”

“Our credibility on the subject of child abuse is shredded,” Conlon said. “You may have a better chance. People — in the church, outside the church, and hanging on the edge — need to know that real progress is being made.”