The folk mass hymns and gospels were familiar, the response “And with your spirit” recited Sundays in church by millions of Catholics, but the 120 faithful gathered outside Seattle’s St. James Cathedral on Sunday afternoon were praying for a cause their bishops are campaigning against. 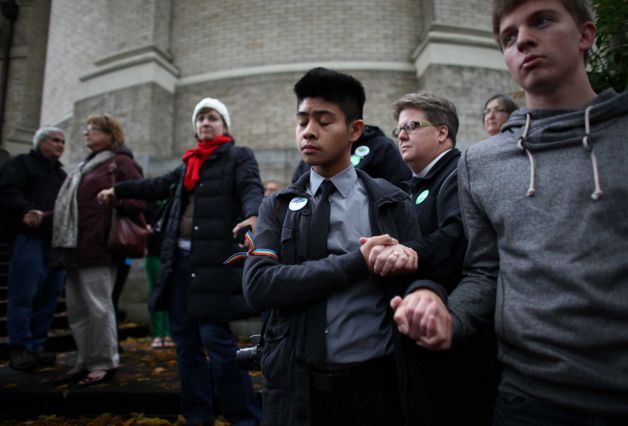 Mobilized by Catholics for Marriage Equality, they celebrated a “Liturgy of Love,” praying for the recognition of same-sex unions and the passage of Referendum 74, which would legalize marriage between persons of the same gender.

“I would just say the God I have come to know is not one to tell people they are not equal,” said Robert Gavino, a Seattle University student.

They are also standing against their bishops.

Seattle Archbishop J. Peter Sartain has issued a pastoral letter denouncing Referendum 74, and put three anti-74 videos on the diocesan website. “R-74 jeopardizes freedom rather than expands it: It endangers our religious liberty and the right of conscience,” Bishop Joseph Tyson of Yakima claimed in a particularly strident letter to the faithful.

We disagree, said those on the steps of St. James Cathedral.

“I find (bishops’ claims) perplexing:. Nothing about marriage equality in the state of Washington is any infringement on liberty. This is about civil marriage and civil law,” said John Morfield, a longtime parishoner at St. Mary’s Catholic Church.

And Barbara Guzzo, organizer of Catholics for Marriage, argued that the bishops have brought “anguish, division and sadness” to the faithful, “particularly those with a gay person in their families, the hurt that this has caused.”

Fr. John Whitney, S.J., pastor of St. Joseph Church, has encouraged discussion and helped a recent meeting to promote reconciliation between those who share the bishops’ passionate opposition and those who back Referendum 74. “Authority never supplants conscience,” he told parishoners in a recent “e-blast.”

But stridently conservative bishops across the country have brought politics to the pulpit — and delivered dictates of what belongs in the consciences of those in the pews.

“A properly formed Catholic conscience will never contradict the Church’s teachings in matters of faith and morality,” Bishop David Kagan of Fargo, N.D., said in a weekend letter. The letter contained no mention of social teachings or poverty or human rights, but among things “never acceptable” was “not recognizing the unique and special role of marriage as a unique union of one man and one woman.”

In Washington, however, more than 60 resigned Catholic priests have endorsed Referendum 74. More than 100 retired and former priests in Minnesota have denounced Archbishop John Nienstedt for his efforts to write a one man-one woman definition of marriage into the state constitution.

State Sen. Ed Murray, D-Seattle, present at St. James on Sunday, is a practicing Catholic and chief sponsor of marriage equality in the Legislature. Murray said he was outside the cathedral as a demonstration of his faith.

“I think any time we show solidarity with those on the margins of our society, it is an expression of our faith,” said Murray. “We (gays) are certainly on the margins . . . at least in the hierarchy’s structure.”

The “Liturgy of Love” took place at the same hour as the weekly Solemn Vespers and Benediction inside St. James Cathedral. Earlier this year, the cathedral refused to serve as a collection center for petitions to force a vote on same-sex marriage.

The liturgy outside was familiar.

It featured singing of the Prayer of St. Francis:

Chad Griffin, president of the Human Rights Campaign — the largest national group campaigning for gay and lesbian rights — spoke at the end of the liturgy. A Georgetown product, he said of his Catholic education: “Nowhere, ever, did it tell me to oppose a right that I might have. Or to support discrimination against my brothers and sisters.”

“The other 49 states are watching,” said Griffin.

Later, in an interview, Griffin noted the long string of defeats for same-sex marriage at the polls. But this year, he predicted, will be different. “Scare tactics, false headlines and lies are not working as they used to,” he said. “It’s close, but I’d rather be where we are than where they are.”

Where gay marriage supporters are is ahead in the polls in three states — Washington, Maryland and Maine — that are voting on marriage equality. In a race where polls are neck and neck, Minnesotans will vote on the constitutional amendment, heavily backed by Catholic bishops, that would write a ban into their state constitution.

Across the North Star state, however, lawn signs have sprouted with the message: “Another Catholic voting No.”