The pope yesterday accepted the resignation of a Chilean bishop who is under investigation by the Vatican for the alleged sexual abuse of a minor. 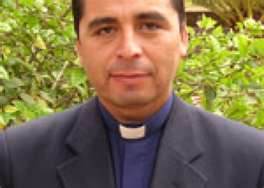 The resignation of Bishop Marco Antonio Ordenes Fernandez of Iquique, Chile, marks one of the few times that the Vatican has acknowledged publicly it was investigating a bishop for sex abuse allegations. Advocates for clerical sex abuse victims have long complained the Vatican has looked the other way when bishops have been accused of abuse or of covering it up.

The Vatican said yesterday that the pope has accepted Ordenes’ resignation under the code of canon law that says a bishop must resign if he is sick or because some other “grave” reason makes him unsuitable for his job.

The 47-year-old Ordenes suffers from a liver ailment and has been seeking medical treatment. But the Vatican Embassy in Santiago confirmed Oct. 2 that it had been investigating Ordenes since April and was offering psychological and other care to “those affected.”

The Vatican spokesman, Federico Lombardi, said the link between the resignation and the investigation “can be considered obvious.”

Ordenes is accused of abusing a 15-year-old altar boy in the northern city of Iquique.

The former bishop admits he had “an imprudent act” with his accuser but says that he met him in 1999 when he was 17 and they had a relationship when he was no longer underage.

“My conscience is clear before God, and that’s what matters,” Ordenes told Chilean newspaper La Tercera in a recent interview.

His accuser, Rodrigo Pino, 30, said the abuse began when he was 15. At first, he said it was forced, but then they became lovers.

The Associated Press doesn’t normally name victims of alleged sexual abuse, but Pino has gone public with his claims.

“We began a friendship because I showed him my interest in becoming a priest. I became very involved with him, and then the abuses began,” Pino told Chilean ADN radio. “He would tell me that he was like a father to me and I was like his son, his lover, his brother and friend. … At first the abuse was forced because I was a boy who fell in love.”

The Vatican Embassy is taking charge of the investigation because Ordenes is a bishop. Usually, a priest accused of sexually abusing children is investigated by his bishop, who then sends the case to the Vatican for review if he finds a semblance of truth to the accusations.

Lombardi said the fact the case was now before the Vatican’s Congregation for the Doctrine of the Faith, which handles cases of clerics accused of the sexual abuse of minors, indicates the investigation concerns the allegation that Ordenes abused Pino when he was underage.

A handful of U.S. bishops have resigned after facing sex abuse allegations. More recently, the then-bishop of Bruges, Belgium, Roger Vangheluwe, quit in 2010 after admitting he had molested his nephew for years starting when he a young boy. The Vatican later sanctioned him.