The finances of the Roman Catholic Church tend to be well concealed. But a spate of bankruptcy cases in the US (8 out of 196 dioceses, with Honolulu teetering on the brink) has enabled The Economist to examine the situation in that country in more detail than is usually possible. 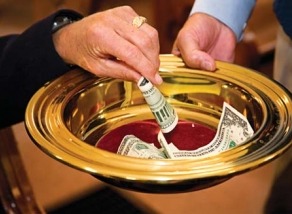 There are 74 million people in the US who describe themselves as Roman Catholic, and the expenditure of the Church is estimated as $170 billion in 2010. Of this, 57% was spent on health-care networks, 28% on colleges and universities, 6% on dioceses, parishes and schools, and 2.7% on charitable activities. Over 1 million people were employed (by comparison, the Walmart supermarket chain employed 2 million people). Less than a tenth of the income comes from church offerings; much of the rest comes from investments, property, wealthy businessmen, and local and federal government support for the hospitals, universities and schools. The Church in the US probably has about 60% of the total wealth of the Roman Catholic Church worldwide.

The Church has paid out $3.3 billion in settlements for child abuse over the last 15 years and this figure is expected to rise considerably. The dioceses are financially independent and the settlements are made by individual dioceses, which is why a number of them have gone bankrupt as a consequence of these settlements. Ten states are considering relaxing the time limitation on investigating child abuse, which could lead to the bankruptcy of several more dioceses. It is estimated that the Church is spending somewhere between $100 000 and $1 million a year in opposing the relaxation of this time limit. The child abuse scandal has led to a considerable reduction in donations to the Church and, at the same time, the shortage of priests and nuns has reduced the amount of the cheap labour available to the Church and has increased the running costs.

The rest of the report is somewhat technical but the following points emerge. Several dioceses have responded to their financial difficulties by raiding the priests’ pension funds. Between 1986 and 2002 the Diocese of Boston collected about $70-90 million in Easter and Christmas offerings, none of which was paid into the clergy retirement fund, although many parishioners thought that this was where the money was going.

Some dioceses have presented their funds as consisting of numerous different accounts for parishes, schools, hospitals, etc, when in fact there is just a single account. The parishes, schools and hospitals have then lost all their investments when the diocese has gone bankrupt.

Other dioceses, threatened with bankruptcy, have tried to shield their money by moving it out of diocesan accounts. In the ongoing Milwaukee bankruptcy case, the Archbishop of Milwaukee authorized a transfer of $55.6 million from the diocesan account into a cemetery fund. One Californian lawyer who has been involved in several of the bankruptcy cases says, ‘We have seen a consistent tactic of Catholic bishops to shrink the size of their assets, which is not only wrong morally but in violation of state and federal laws’. A whole city block in downtown San Diego was valued in the diocesan accounts at $40 000, the price that had been paid for it in the 1940s. The judge in the case was so irritated by the various ‘shenanigans’ that she ordered a special investigation into the diocesan finances.

The Economist report exposes considerable financial corruption in Roman Catholic dioceses in America but, as so often when dealing with the Church of Rome, there is a reluctance to draw conclusions. Somehow the idea is preserved that the Church of Rome is doing a lot of good in America. One would hope that, from her financial corruption, people would readily deduce her spiritual corruption, but they are remarkably slow to do so.