The aunt of a Roman Catholic priest missing in Greece said she fears her nephew is dead but holds out hope because he is known for surviving against great odds.

Sister Marcianne Kappes, a professor at St. Gregory’s University in Shawnee and a Carmelite Sister of St. Therese from Villa Teresa Catholic School in Oklahoma City, said the details of her nephew’s disappearance are sketchy but that his family is sure he is in trouble. 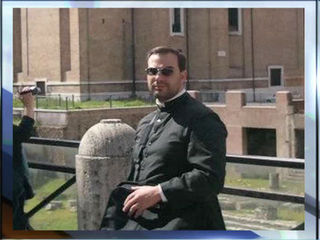 The Rev. Christiaan Kappes, 36, told family members he feared for his life earlier this week. He was dropped off at an airport in Athens on Monday but never boarded the plane and has not been seen since, Sister Kappes said on Thursday.

“I’m waiting from a call from my four younger brothers to find out the latest,” she said. “Either he’s dead or he’s managed to go into hiding, but if they’re holding him I think he’s dead.”

Kappes, who is attached to the Archdiocese of Indianapolis, Ind., has been attending the University of Athens for about three years, said Greg Otolski, a spokesman for the archdiocese.

He was sent there at the request of the Vatican, which is trying to improve relationships between the Roman Catholic Church and Orthodox churches, Otolski told the Indianapolis Star.

The church, the U.S. State Department and the Federal Bureau of Investigation have been notified of his disappearance.

Sister Kappes said her nephew may have gotten into trouble through his translator, but said she’s heard differing reports about his disappearance and declined to speculate further.

Kappes told his family on Monday that he and his translator, a Greek woman, were in danger from her family, who was seeking to take away inheritance money, according to the Star. 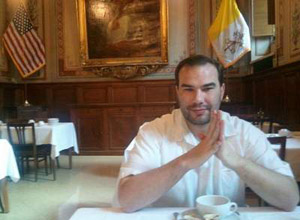 A man known for immersing himself in some of the world’s poorest areas, Sister Kappes said her nephew is well-traveled and has escaped trouble before.

A member of the national exhibition wrestling team in the 1980s, he spent a week without food in Eastern Europe after the fall of communism, she said. He previously spent a year working with the poor in Mexico.
“I never give up hope to the last minute, and even to the last minute my family is a little crazy — we believe in life after death, and we believe we will see each other again,” Sister Kappes said.

Her nephew visited Oklahoma City for wrestling clinics nearly every year when he was young, and was well known to some of the monks at St. Gregory’s despite not having visited for the past decade or so.
On Thursday, the university in Shawnee held a special mass to support him.

“I think the interesting thing about Chris is, no matter where he is he works with the poor,” she said. “He’s the kind of guy that is multifaceted; he’s equally at home with a group of dignitaries as he is working with orphaned gypsy boys. You know, you hate to lose kids like him for the world.”