A Minneapolis-area priest has called for the resignation of Archbishop John Nienstedt after the archbishop supported Minnesota’s effort to pass a constitutional amendment banning same-sex “marriage.” 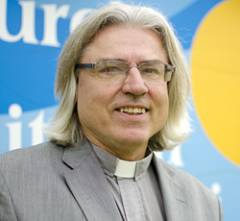 Fr. Michael Tegeder wrote a letter to the editor of the Minneapolis Star-Tribune oh Thursday requesting that Archbishop Nienstedt “prayerfully consider stepping down from his office.”

Fr. Michael Tegeder did not defend heterosexual marriage.
Calling Nienstedt’s support for the marriage amendment a “misguided crusade,” he suggested that the archbishop’s resignation would be “healing for our state” and “would show some magnanimity on [Nienstedt’s] part.”

Tegeder has long been a dissenter from Catholic teaching on the issue of homosexuality. He and the archbishop have clashed repeatedly over the issue.

Last year, Fr. Tegeder refused to comply with Archbishop Nienstedt’s request that all priests read a “marriage prayer” at Masses, asking God to grant the faithful “courage to proclaim and defend your plan for marriage, which is the union of one man and one woman.

The priest has since spoken to his parishioners and numerous media outlets about his opposition to the marriage amendment, prompting Nienstedt to send him a letter warning him that he may be stripped of his ministerial privileges if he continues to speak in defiance of Church teaching.

Fr. Tegeder did not relent In June, the priest gave an interview to the liberal City Pages in which he criticized the archbishop for his stance in favor of the gay marriage ban.

“Nienstedt is just so rigid about these things,” Fr. Tegeder said. “But, you know — just let go of it. What are we trying to defend?”

Just a few weeks before Minnesotans voted on the marriage amendment, the priest sat for another interview, this time with the Star-Tribune.

The interviewer described him as angry and emotional, alternately pounding on the table and breaking down in tears.

He wore a rainbow button and talked about how it hurtful it was to see “sweet, sweet” homosexual men being taunted. He again had harsh words for Abp. Nienstedt, claiming that the archbishop’s attempt to silence his pro-homosexual speech was a sign of “moral bankruptcy.”

Archbishop Nienstedt “is saying he knows what’s best for Minnesota,” Fr. Tegeder told the Star-Tribune. “Well, he just got here. He’s in over his head. We don’t deserve him, and he doesn’t deserve us.”

The archbishop first arrived in Minnesota in 2001 when he was assigned bishop of New Ulm. He has served continuously in Minnesota since then.

It is unknown whether Abp. Nienstedt will proceed with removal of Fr. Tegeder’s ministerial privileges, in accordance with his prior warning.

Calls and e-mails to the Archbishop’s office requesting comment were not immediately returned.