File under “Doubling Down — In The Vain Hope That The Tide of History Will Turn Back The Clock.”

Benedict promoted traditional marriage in his annual ‘State of the Church’ speech at the Vatican and added posts lauding truth, faith and family to his popular personal Twitter account this week. 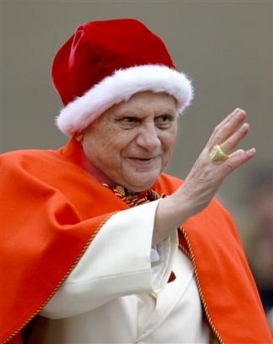 Speaking to the Curia, the bureaucrats who run the global church of 1.2 billion Catholics, the pope said opposition to gay marriage is a way of defending humanity: “Whoever defends God is defending man.”

Benedict also quoted the chief rabbi of France, Gilles Bernheim, who has written that promoting a right to same-sex marriage is an “attack” on the traditional family made up of a father, mother and children.

These are the threats to world peace, huh? Not war! Not poverty! Not a lack of access to education! Not sectarianism! Not nuclear arms! Not the changing climate! Jesus! No wonder fewer and fewer people take the man and the institution he represents seriously any more.