A fiery appeal for church reform by an influential Swiss abbot has attracted widespread attention throughout Europe, and has, moreover, been welcomed by the future president of the Swiss bishops’ conference. 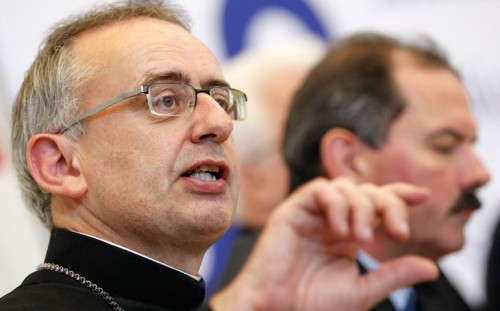 Fifty-year-old Abbot Martin Werlen, leader of the Abbey of Einsiedeln and himself a member of the Swiss bishops’ conference, first voiced his appeal in a sermon on the 50th anniversary of the beginning of the Second Vatican Council in October. The sermon was later published in a 39-page brochure that sold out within three days and is now in its third edition.

Titled “Discovering the Embers Under the Ashes,” it echoes remarks by Cardinal Carlo Maria Martini in his last interview before his death Aug. 31. Referring to the state of the church today, Martini spoke of his sense of powerlessness and how Catholicism’s “embers” were “hidden under the ashes.”

Werlen said he is alarmed by the present state of the church. “The situation of the church is dramatic, not only in the German-speaking countries,” he said. “It is dramatic not only because of the rapidly decreasing number of priests and religious or because of plummeting church attendance. The real problem is not a problem of numbers. What is missing is the fire! We must face the situation and find out what is behind it.”

He said there is leeway for reform and discussed possible reforms at length.

For example, he said, the church could learn from the way the Orthodox church deals with remarried divorced people, who are not barred from Communion. The Catholic church has never condemned the Orthodox approach, Werlen emphasized.

Local churches should also have more say in episcopal nominations, he said, recalling that religious orders have always elected their superiors democratically over the centuries.

On priestly celibacy, he quoted the Code of Canons of the Eastern Churches, promulgated by Pope John Paul II in 1990. The code says that clerical celibacy “is to be greatly esteemed everywhere,” but adds that “likewise, the hallowed practice of married clerics in the primitive Church and in the tradition of the Eastern Churches throughout the ages is to be held in honor.”

There is also a lot of leeway as far as cardinals are concerned, Werlen pointed out. Women and men from all over the world, both young and old, could be elected to the cardinalate for a period of five years and could meet with the pope every three months in Rome. “Such meetings could bring a new dynamism into church leadership,” Werlen suggested.

The church could also “rediscover” synodal processes. “If bishops’ synods are so influentially prepared and accompanied by the Roman Curia that nothing new can emerge, is that a witness of faith?” he asked. As at Vatican II, “bishops should realize their responsibilities and with the help of theologians, and together with the pope, face changes in full faith — and let paper remain paper!”

Werlen wrote that he deplores the lack of courage, vision and creativity in today’s church, which he says is crawling along “with the hand brake on.”

“The problems are known. Pope Benedict on occasion refers to them. But nothing concrete is done to solve them,” Werlen said.

Sweeping problems under the table or forbidding discussion of certain issues undermines the church’s credibility, he warned.

But polarization between conservatives and progressives in the church, which he said has now reached a “frightening” level, has a deadening effect, he cautioned.

“I myself together with the Einsiedeln community would like to take another path, namely that of seeking the embers in the ashes,” he said. He pointed out that Einsiedeln is in dialogue with both the Lefebvrist Society of St. Pius X and the progressive Catholic theologian Fr. Hans Küng.

Within a week after the brochure was first published, Werlen received more than a 1,000 emails and 100 letters, many from prominent Catholics. He said he was “quite overwhelmed” by this and added, “The embers are there. One can feel people of different generations heaving a deep sigh of relief.”

After reading the brochure, Bishop Markus Büchel of Sankt Gallen, newly elected president of the Swiss bishops’ conference, released the following statement: “Abbot Werlen has taken up urgent questions the faithful are asking; he has outlined the problems very clearly and has put forward possible solutions. This is an impetus for very necessary discussions in the church that are also a great concern of mine. That is why I am most thankful to him.”

Büchel has been elected to succeed Bishop Norbert Brunner of Sion as conference president for three years starting Jan. 1.

Werlen became abbot of Einsiedeln in 2001. The abbey is a famous pilgrimage shrine in the oldest part of Switzerland, its heartland. Between 150,000 and 200,000 pilgrims annually visit the shrine, which at times rivaled Santiago de Compostela in Spain.