By JON HURDLE and ERIK ECKHOLM

Msgr. William J. Lynn, the first Roman Catholic Church official in the United States to be convicted of covering up sexual abuses by priests under his supervision, was sentenced Tuesday to three to six years in prison. 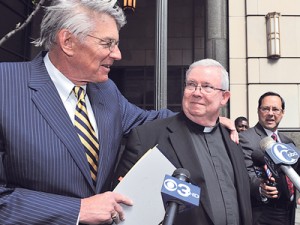 “You knew full well what was right, Monsignor Lynn, but you chose wrong,” Judge M. Teresa Sarmina of Common Pleas Court said as she imposed the sentence, which was just short of the maximum of three and a half to seven years. Monsignor Lynn must serve at least three years before he is eligible for parole.

Monsignor Lynn, 61, was found guilty on June 22 of child endangerment after a three-month trial that revealed efforts over decades by the Philadelphia archdiocese to play down accusations of child sexual abuse and avoid scandal. He was acquitted of conspiracy and a second child endangerment charge.

Monsignor Lynn served as secretary for clergy for the 1.5 million-member archdiocese from 1992 to 2004, recommending priest assignments and investigating abuse complaints. During the trial, prosecutors presented evidence that he had shielded predatory priests, sometimes transferring them to unwary parishes, and lied to the public to avoid bad publicity and lawsuits.

The conviction of a senior official, followed by a prison sentence, has reverberated among Catholic officials around the country, church experts said.

“I think this is going to send a very strong signal to every bishop and everybody who worked for a bishop that if they don’t do the right thing, they may go to jail,” said the Rev. Thomas J. Reese, a senior fellow at the Woodstock Theological Center at Georgetown University. “They can’t just say ‘the bishop made me do it.’ That’s not going to be an excuse that holds up in court.”

In a three-minute statement before sentencing, Monsignor Lynn, dressed in a black clerical shirt and white collar, said: “I have been a priest for 36 years, and I have done the best I can. I have always tried to help people.”

Turning toward relatives of an abuse victim in the courtroom, he said, “I hope someday that you will accept my apology.”

But he did not comment on the broader accusations that he put children at risk by repeatedly protecting “monsters in clerical garb,” as Judge Sarmina described it at the hearing.

The sentence was a victory for the Philadelphia district attorney, R. Seth Williams, who said outside the courtroom, “Many people say that the maximum still would not have been enough.”

Prosecutors argued that the gravity of Monsignor Lynn’s crime — giving known sexual predators continued access to children, causing lifelong anguish and damage to some — was “off the charts.”

Monsignor Lynn’s lawyers said they would appeal the conviction, saying that the child endangerment law at the time did not apply to supervisors and that the judge erred in allowing testimony about accusations that were beyond the statute of limitations.

In a statement Tuesday, the Archdiocese of Philadelphia said that its procedures for protecting children had improved significantly since “the events some 10 years ago that were at the center of this trial.”

It acknowledged “legitimate anger in the broad community toward any incident or enabling of sexual abuse.” But it also described the sentence as overly harsh, saying “fair-minded people will question the severity.”

“We hope that when this punishment is objectively reviewed, it will be adjusted,” it said.

After the sentencing, Ann Casey, a friend of Monsignor Lynn for 36 years, said she believed he was a scapegoat and a victim of his intense faith in the archdiocese’s leaders. “It was his vow of obedience to the church that landed him this morning in jail,” she said.

During the trial, Monsignor Lynn’s lawyers argued that he had followed the instructions of Cardinal Anthony J. Bevilacqua, who was the archbishop of Philadelphia from 1988 to 2003 and who died in January.

Monsignor Lynn’s conviction was for lax oversight of one former priest, Edward V. Avery, who spent six months in a church psychiatric center in 1993 after an abuse episode. Doctors said he should be kept away from children. But Monsignor Lynn sent him to live in a rectory and did not warn parish officials.

In 1999, Mr. Avery engaged in oral sex with a 10-year-old altar boy. He pleaded guilty to the assault just before Monsignor Lynn’s trial and was sentenced to two and a half to five years in prison.