A Franciscan friar accused of sexually abusing students at Catholic high schools in Ohio and Pennsylvania killed himself at a western Pennsylvania monastery, police said Saturday. 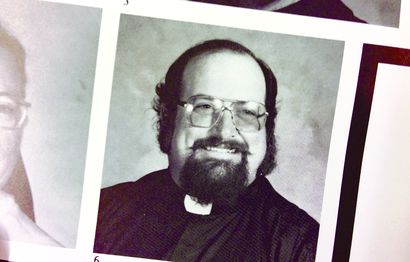 Brother Stephen Baker, 62, was found dead of a self-inflicted knife wound at the St. Bernardine Monastery in Hollidaysburg on Saturday morning, Blair Township Police Chief Roger White said. He declined to say whether a note was found.

Baker was named in legal settlements last week involving 11 men who alleged that he sexually abused them at a Catholic high school in northeast Ohio three decades ago. The undisclosed financial settlements announced Jan. 16 involved his contact with students at John F. Kennedy High School in Warren, Ohio from 1986-90.

The Youngstown diocese previously said it was unaware of the allegations until nearly 20 years after the alleged abuse.

“Let us continue to pray for all victims of abuse, for Brother Baker’s family and the repose of his soul,” Youngstown Bishop George Murry said in a statement Saturday.

After the settlements were announced, the Altoona-Johnstown Diocese in central Pennsylvania said it received complaints in 2011 of possible abuse by Baker at Bishop McCort High School in Johnstown, about 60 miles east of Pittsburgh.

Bishop McCort High School hired an attorney to investigate after several former students alleged they were molested by Baker in the 1990s. Attorney Susan Williams said three former students had talked to her in detail about the alleged abuse.

Bishop Mark Bartchak of the Altoona-Johnstown Diocese said in a statement that he was saddened by the news of Baker’s death, but declined further comment citing pending legal action involving the diocese.

A message left for Father Patrick Quinn, the head of Baker’s order, the Third Order Regular Franciscans, was not immediately returned.

Judy Jones, assistant Midwest director of the Survivors Network of those Abused by Priests, said the organization still hopes people who know about other abuse allegations against Baker will continue to come forward.

“We feel sad for Br. Baker’s family but even sadder for the dozens of boys who Baker assaulted,” she said in a statement.