File Under “Whoops!”  I wonder if police also checked his rectum for any, um…foreign objects he might’ve “tripped and fallen” on? 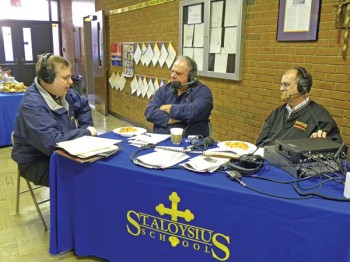 The pastor of St. Aloysius church on Springfield’s north end has been granted a leave of absence after he called 911 from the rectory and told a dispatcher that he needed help getting out of handcuffs.

“I’m going to need help getting out before this becomes a medical emergency,” Father Tom Donovan told a dispatcher who sounds a bit incredulous during the Nov. 28 call.

“You’re stuck in a pair of handcuffs?” the dispatcher asks.

“(I was) playing with them and I need help getting out,” Donovan responds.

Donovan told the dispatcher that he was alone in the rectory. It’s not clear exactly how he ended up in handcuffs or why he feared a medical emergency. His voice sounds garbled or muffled on the tape, and sources say that police discovered some sort of gag on the priest when they arrived.

The diocese has been tight-lipped about the matter, saying only that Bishop Thomas Paprocki granted Donovan’s request for a leave of absence at some point before Christmas. The diocese knows about the incident, given that Brad Huff, an attorney for the diocese, has been given a copy of the 911 tape by the Sangamon County Emergency Telephone System Department. Kathie Sass, spokeswoman for the Diocese of Springfield, said that the diocese also has a copy of a police report on the matter.

Sass would not disclose Donovan’s whereabouts or say whether he is staying at a church-affiliated location.

“I wouldn’t be able to tell you where Father Donovan is,” Sass said. “There’s a matter of privacy there.”

Sass said that Donovan approached Paprocki after the incident and asked for help.

Paprocki reviewed the police report after speaking with Donovan, and the police account jibed with what the priest told the bishop, Sass said.

2 Replies to “Tied up at the moment”