The Archdiocese of L.A. took $115 million from its cemeteries’ maintenance fund in 2007, nearly depleting it. The move seems legal, but it was not announced, and relatives of the dead were not told.

Pressed to come up with hundreds of millions of dollars to settle clergy sex abuse lawsuits, Cardinal Roger M. Mahony turned to one group of Catholics whose faith could not be shaken: the dead. 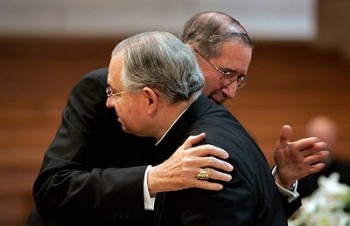 Under his leadership in 2007, the Archdiocese of Los Angeles quietly appropriated $115 million from a cemetery maintenance fund and used it to help pay a landmark settlement with molestation victims.

The church did not inform relatives of the deceased that it had taken the money, which amounted to 88% of the fund. Families of those buried in church-owned cemeteries and interred in its mausoleums have contributed to a dedicated account for the perpetual care of graves, crypts and grounds since the 1890s.

Mahony and other church officials also did not mention the cemetery fund in numerous public statements about how the archdiocese planned to cover the $660-million abuse settlement. In detailed presentations to parish groups, the cardinal and his aides said they had cashed in substantial investments to pay the settlement, but they did not disclose that the main asset liquidated was cemetery money.

In response to questions from The Times, the archdiocese acknowledged using the maintenance account to help settle abuse claims. It said in a statement that the appropriation had “no effect” on cemetery upkeep and enabled the archdiocese “to protect the assets of our parishes, schools and essential ministries.”

Under cemetery contracts, 15% of burial bills are paid into an account the archdiocese is required to maintain for what church financial records describe as “the general care and maintenance of cemetery properties in perpetuity.”

Day-to-day upkeep at the archdiocese’s 11 cemeteries and its cathedral mausoleum is financed by cemetery sales revenue separate from the 15% deposited into the fund, spokeswoman Carolina Guevara said. Based on actuarial predictions, it would be at least 187 years before cemeteries are fully occupied and the church started to draw on the maintenance account, she said.

“We estimate that Perpetual Care funds will not be needed until after the year 2200,” Guevara wrote in an email.

The church’s use of fund money appears to be legal. State law prohibits private cemeteries from touching the principal of their perpetual care funds and bars them from using the interest on those funds for anything other than maintenance. Those laws, however, do not apply to cemeteries run by religious organizations.

Mary Dispenza, who received a 2006 settlement from the archdiocese over claims of molestation by her parish priest in the 1940s, said her great-uncle and great-aunt are buried in Calvary Cemetery in East L.A.

“I think it’s very deceptive,” she said of the way the appropriation was handled. “And I think in a way they took it from people who had no voice: the dead. They can’t react, they can’t respond.”

The fund dates to the tenure of Bishop Francis Mora, who opened Calvary in 1896. An official archdiocese history published in 2006 recounts how the faithful of Mora’s era were assured their money was “in the custody of an organization of unquestionable integrity and endurance” — the Catholic Church.

Over the next century, the archdiocese built more cemeteries, and each person laid to rest meant a new deposit into the maintenance account. By the time of the sex abuse settlement, there were cemeteries from Pomona to Santa Barbara and $130 million in the fund. Church officials removed $114.9 million in October 2007.