File under: It’s gettin’ nasty! The secret internal power struggle is beginning to seep into the public domain. There is no way that Gomez would attack Mahony without the explicit authorization of B-16. The pope is throwing Mahony under the bus. His thinking…better to sacrifice a cardinal and a bishop (Curry) than have this whole thing skink up the Vatican. This is SOOO fascinating. Regular folk, like us, almost never get to see this kind of ecclesiastical fight to the death. The long knives are out!

Cardinal Roger Mahony, the retired archbishop of Los Angeles who was barred from public ministry by his successor over his handling of sex abuse, has issued a rare public response to the action. 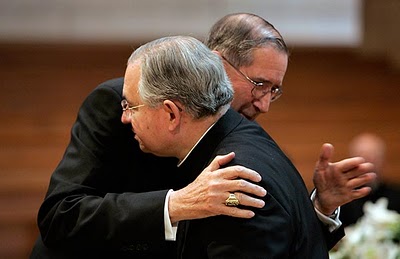 Writing an open letter to Archbishop Jose Gomez, the archdiocese’s current leader, Mahony states that during his leadership the archdiocese became “second to none in protecting children and youth.”

“When you were formally received as our Archbishop on May 26, 2010, you began to become aware of all that had been done here over the years for the protection of children and youth,” Mahony writes to Gomez in the letter, which Mahony has made available on his personal blog.

“You became our official Archbishop on March 1, 2011 and you were personally involved with the Compliance Audit of 2012 — again, in which we were deemed to be in full compliance,” Mahony continues.

“Not once over these past years did you ever raise any questions about our policies, practices, or procedures in dealing with the problem of clergy sexual misconduct involving minors.”

Typically seen as shying away from public criticisms of their peers, Catholic bishops rarely issue public responses to one another’s actions.

In a letter outlining his decision to ask Mahony to stay away from public ministry in LA, Gomez wrote Thursday that Mahony had failed to protect young people from sexually abusive priests.

The Gomez letter accompanied a release of extensive files concerning Los Angeles priests who had abused minors, most involving abuse that had occurred decades ago.

“I find these files to be brutal and painful reading. The behavior described in these files is terribly sad and evil. There is no excuse, no explaining away what happened to these children. The priests involved had the duty to be their spiritual fathers and they failed,” Gomez wrote.

“My predecessor, retired Cardinal Roger Mahony, has expressed his sorrow for his failure to fully protect young people entrusted to his care,” he added. “Effective immediately, I have informed Cardinal Mahony that he will no longer have any administrative or public duties.”

For his part, Mahony states in his letter to Gomez that Mahony’s understanding of sex abuse evolved over the years.

“Nothing in my own background or education equipped me to deal with this grave problem,” states Mahony. “In two years [1962 – 1964] spent in graduate school earning a Master’s Degree in Social Work, no textbook and no lecture ever referred to the sexual abuse of children. While there was some information dealing with child neglect, sexual abuse was never discussed.”

Writing of the era of the documents from the 1980s, Mahony writes that he began implementing “policies and procedures to guide all of us in dealing with allegations of sexual misconduct” in 1986.

He was given advice, Mahony states, “to remove priests from active ministry if there was reasonable suspicion that abuse had occurred, and then refer them to one of the several residential treatment centers across the country for evaluation and recommendation.”
“We were never told that, in fact, following these procedures was not effective, and that perpetrators were incapable of being treated in such a way that they could safely pursue priestly ministry,” Mahony states.

“I have stated time and time again that I made mistakes, especially in the mid-1980s,” Mahony writes.

“Unfortunately, I cannot return now to the 1980s and reverse actions and decisions made then. But when I retired as the active Archbishop, I handed over to you an Archdiocese that was second to none in protecting children and youth.”