After Pope Benedict XVI’s shock resignation due to his ill health, one of the top contenders for the post is Ghanaian Cardinal Peter Turkson

The top three candidates for Pope are all vehemently anti-LGBT, with one defending African laws punishing gay people with death. 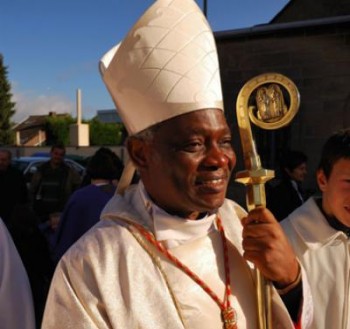 Ghanaian Cardinal Peter Turkson, president of the Pontifical Council for Justice and Peace, has said many of the laws imposed on gay people in Africa are an ‘exaggeration.’

Last year, the National Catholic Register reported the Cardinal saying it is important people understand the ‘reasons’ why some African governments have created legislation against homosexuality.

Turkson argues the ‘intensity of the reaction is probably commensurate with tradition’, saying the African culture needs to be respected.

‘When you’re talking about what’s called “an alternative lifestyle”, are those human rights?’ he said.

‘There’s a subtle distinction between morality and human rights, and that’s what needs to be clarified.’

In over 30 African countries, homosexuality is illegal and punishments range from public whippings to jail time and capital punishment.

In a 2003 speech at Georgetown University in the UK, Arinze likened homosexuality with pornography, infanticide and adultery.

He has also opposed religious people wearing rainbow sashes, who prove they are ‘showing their opposition to Church teaching on a major issue of natural law and so disqualify themselves from being given Holy Communion.’

Like Turkson and Arinze, Ouellet has regularly spoken out against homosexuality.

As the same-sex marriage legislation was being debated in Canada, he warned anti-gay speakers could be brought to the ‘court because I am teaching against homosexuality as part of the doctrine of the Catholic Church.’

He has also referred to homosexuality as an ‘abomination’, and the path to equal rights for gay people as a ‘black cloud over America.’

However he has also apologized for Catholic attitudes prior to 1960 that promoted ‘anti-Semitism, racism, indifference to First Nations and discrimination against women and homosexuals.’

Pope Benedict XVI will leave his post on 28 February, where there will be a vacant seat. As there will be no need for a time of traditional mourning, the Vatican will decide on the next pope by the end of March.