ELEVEN AMERICANS will be among the 117 cardinals of the Catholic Church heading soon to Rome to select the next pope. One of them, Cardinal Roger M. Mahony, for a quarter-century the archbishop of Los Angeles, is lucky not to be in prison, for there is no dispute that he orchestrated what amounted to a cover-up of clerical sexual abuse in Los Angeles. 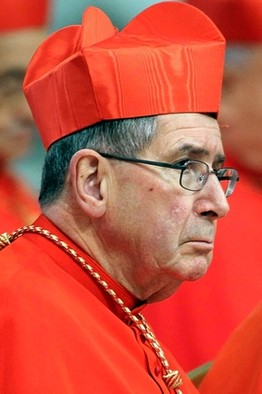 By now it is familiar news, though no less stomach-turning, that top officials in the Catholic Church protected pedophile priests for decades — impeding criminal investigations, shuffling offenders to new parishes or abroad, and resisting disclosure. In so doing, they exhibited little concern for victims of sex abuse, usually boys.

Still, the scale of the misdeeds in Los Angeles, the largest archdiocese in the United States, counts as a particular disgrace. And it is Cardinal Mahony, who resigned as archbishop two years ago, who oversaw the whole dirty business. For that he has been publicly censured by his successor.

In a highly unusual rebuke, Archbishop José H. Gomez, who took over the church’s top position in Los Angeles in 2011, announced this month that Cardinal Mahony would be stripped of his public duties for having swept under the rug hundreds of allegations of clerical abuse in the 1980s.

Though nearly unprecedented, the reprimand was also largely symbolic. While Cardinal Mahony may have to curtail speaking engagements and other appearances, he is still, as Archbishop Gomez said, a “bishop in good standing.” Translation: Cardinal Mahony remains one of the most powerful figures in the church hierarchy, a member of a tiny elite empowered to guide its finances and vote on the next pope.

His continued prominence reflects the culture of impunity in the Catholic Church a decade after its tolerance and complicity in the abuse of children was exposed. The church has adopted policies intended to avoid fresh outrages, but it also has fought to protect supervisors who shielded criminal molesters.

Cardinal Mahony is a prime example. Even after his archdiocese reached a $660 million civil settlement with more than 500 victims of abuse in 2007, he and the hierarchy did everything in their power to avoid individual accountability. As recently as last week, church lawyers tried to keep secret the names of top officials and parish priests implicated in abuse cases. Fortunately, a California judge ordered disclosure of the relevant church personnel files.

That triggered publication of some 14,000 pages, including notes between Cardinal Mahony and a top aide showing that they repeatedly transferred abusive priests out of the country and the state to evade investigators and publicity. The cardinal also cautioned against exposing abusive priests to therapists who might be legally obligated to report their crimes.

In response to his public rebuke, Cardinal Mahony, who has a master’s degree in social work, wrote that nothing in his training had alerted him to the risks involved in the sexual abuse of minors. How about common sense, respect for the law and a basic understanding of human beings?

The statute of limitations may have expired for Cardinal Mahony and others in Los Angeles who sought to shield wrongdoers from the law. But their actions will not be soon forgotten.