File under: Cut Your Nose Off To Spite Your Face!

Five key Catholic bishops are opposing the newly authorized Violence Against Women Act for fear it will subvert traditional views of marriage and gender, and compromise the religious freedom of groups that aid victims of human trafficking. 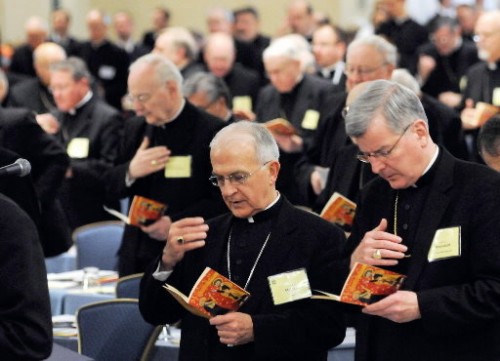 The act, to be signed into law by President Obama on Thursday (March 7), is intended to protect women from domestic violence, sexual assault and human trafficking, and allows the federal government to spend money to treat victims and prosecute offenders.

But for the first time since the original act became law in 1994, it spells out that no person may be excluded from the law’s protections because of “sexual orientation” or “gender identity” — specifically covering lesbian, transgender and bisexual women.

That language disturbs several bishops who head key committees within the U.S. Conference of Catholic Bishops that deal with, among other issues, marriage, the laity, youth and religious liberty.

“These two classifications are unnecessary to establish the just protections due to all persons. They undermine the meaning and importance of sexual difference,” the bishops said in a statement released by the USCCB on Wednesday.

“They are unjustly exploited for purposes of marriage redefinition, and marriage is the only institution that unites a man and a woman with each other and with any children born from their union,” the statement continued.

The bishops also take issue with the lack of “conscience protection” for faith-based groups that help victims of human trafficking, an addition they sought after the Obama administration decided in 2011 to discontinue funding for a Catholic group that works with trafficking victims, many of whom were forced to work as prostitutes.

The administration instead funded other groups that, according to the Department of Health and Human Services, could provide a full range of women’s health services, including referrals for contraception or abortion, both of which the Catholic Church opposes.

“Conscience protections are needed in this legislation to ensure that these service providers are not required to violate their bona fide religious beliefs as a condition for serving the needy,” reads the statement of the bishops, who have supported previous versions of the act.

The statement was signed by:

— Archbishop Salvatore J. Cordileone of San Francisco, chairman of the Subcommittee for the Promotion and Defense of Marriage

— Archbishop Jose H. Gomez of Los Angeles, chairman of the Committee on Migration

The bill passed the Senate 78 to 22 on Feb. 12, and the House passed it on Feb. 28 on a vote of 286 to 138, with no Democrats in opposition. Some Republicans objected to the bill for reasons similar to the bishops’.