Now that the smoke has cleared from St. Peter’s Square, the future of the Roman Catholic Church is on the minds of many. Catholics are eternally hopeful, so the news of the papal election of an Argentine Jesuit, Jorge Mario Bergoglio, a man of simple personal ways, engendered a certain enthusiasm.

My first official act in the new pontificate was to call a wise octogenarian friend in Buenos Aires, my favorite city in the world, to join in that country’s pride and get an initial assessment of the man. Her reaction was what I would have expected from a Catholic in Boston if Cardinal Bernard Law had been elected. Her one word that stood out was “scary.” 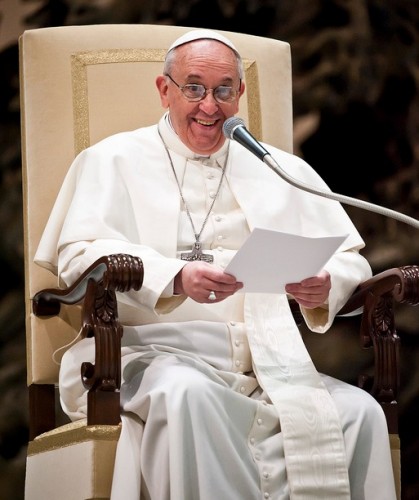 Progressive Catholics had low expectations of the conclave since only what went in would come out, only hand-picked conservative, toe-the-party-line types were electors. Moreover, the process was flawed on the face of it by the lack of women, young people, and lay people. It was flawed by a dearth of democracy. Not even the seagull that sat on the chimney awaiting the decision was enough to persuade that the Holy Spirit was really in charge.

Structural changes in the kyriarchal model of church are needed so that many voices can be heard and many people can participate in decision-making in base communities, parishes, regions, and indeed in global conversations among the more than one billion Catholics. Short of this, no amount of cleaning up the curia or leading by personal asceticism, which are both expected of Pope Francis, will suffice for more than cosmetic changes. Leaving aside the ermine-lined cloak that his predecessor favored is symbolically notable but not institution changing.

The papal selection process, long thought to be secret, is now quite transparent. Once the white smoke rose, but before the name was announced, the Italian Bishops’ Conference tipped off the world in their email of congratulations to Cardinal Angelo Scola of Milan. Oops! He was not elected pope, even though he was widely considered the choice of the Pope Emeritus and those who want the curia reformed. Instead, the second highest vote getter at the previous conclave (2005) that picked Benedict XVI was chosen this time. Cardinal Bergoglio was apparently more acceptable to left, right, and center of a very conservative group of electors.

Geography is destiny. A cursory look at the Roman Catholic Church worldwide shows more than 400 million Catholics in Latin America, 125 million each in Asia and Africa, 265 million in Europe, 100 million in North America, and 8 million in Oceana. A Latin American pope is a good business decision, consistent with what an economist suggested as part of a wholesale makeover of the institution. The European Catholic Church has simply lost market share (from 65 percent a century ago to 24 percent now). The Global South is the church’s future. So a Latin American pope is a logical choice. But let the record show that this one comes from a country where Mass attendance numbers are more like France today than Italy of old. Argentina is an increasingly secular democracy where Cardinal Bergoglio grew used to being on the losing side of social change efforts, including divorce and same-sex marriage, which are now legal there. Argentina is Argentina.

After completing a doctoral dissertation in which I compared Latin American liberation theology and U.S. feminist theology, I spent 1980-81 as a visiting professor at ISEDET, the ecumenical Protestant seminary in Buenos Aires. I volunteered at Servicio Paz y Justicia led by Adolfo Perez Esquivel, where I got an education about social justice. The “Dirty War” was raging. Religious people were working feverishly to find thousands of people who had been “disappeared” and prevent others from suffering the same fate. Many Catholic priests perished; Jews suffered disproportionately to their numbers in the population.

Our faculty, some members of the Lutheran school, and those of Seminario Rabinico Latinoamericano led brilliantly by Conservative Rabbi Marshall Myer (to whom Jacobo Timmerman dedicated his stirring book, Prisoner Without a Name, Cell Without a Number) met monthly for lunch and discussion of how we could be useful in a difficult situation. I do not recall any Jesuits in attendance. Plans to host a weekend meeting at our school focused on human rights and youth resulted in the firebombing of the ISEDET library in November 1980 with the loss of 2,000 books. I learned close up and personal that theology has consequences.

The controversy over then Cardinal Bergoglio’s role in the kidnapping of two Jesuits during this period is instructive. As a Jesuit leader, Padre Jorge, as he liked to be known informally, opposed liberation theology and the ecclesial model of base communities that was consistent with it. In my view, he opposed the most creative, politically-useful, scripturally-sound way of thinking about how people who were made poor by the avarice of others could change their context and bring about justice.

Instead of putting the public weight of the Jesuit order behind the efforts of some of his brothers in slums and shantytowns (and the women who were involved in both theological and pastoral work from this perspective), he ordered Jesuits to stick with parish assignments. The two priests in question chose to cast their lot with the poor instead of obey the dictates of the order.

Did the Jesuit superior-now-Pope Francis call the military dictators and agree to their kidnapping? No one is accusing him of this. Adolfo Perez Esquivel, a human rights champion and Nobel Peace Laureate (1980) knew the scene so I trust his word. He says that the now pope was not involved with the military. There were bishops who played tennis with the generals, but Bergoglio was not one of them. In fact, Padre Jorge is alleged to have intervened with military leaders for the release of the two Jesuits. But this is small comfort.

The larger conservative theological program—which was in public opposition to the best efforts of church people to bring about justice by living out liberation theology principles—helped to create the dangerous situation in the first place. To apologize thirty years later and say the institutional church did not do enough does not bring back the disappeared. Theology has consequences. Moral do-overs are few and far between.

The hierarchical church’s behavior was to Argentina what the sex abuse cases and episcopal cover-up have been for U.S. Catholics, namely the straw that broke the camel’s back. I am haunted by a picture of the Mothers of the Plaza de Mayo, mothers of the disappeared, who went to the church center where the bishops were on retreat to clamor for their help in finding their children. The picture shows a line of police between the mothers and the bishops, the mothers on one side of the fence and the bishops on the other. The institutional church in Argentina has never recovered its credibility. To the contrary, it is further eroded by similar instances of being on the wrong side of the history of justice.

The election of a doctrinally conservative pope, even one with the winning simplicity of his namesake, is especially dangerous in today’s media-saturated world where image too often trumps substance. It is easy to rejoice in the lack of gross glitter that has come to characterize the institutional church while being distracted from how theological positions deepen and entrench social injustice. A kinder, gentler pope who puts the weight of the Roman Catholic hierarchal church behind efforts to prevent divorce, abortion, contraception, same-sex marriage—as Mr. Bergoglio did in his country—is, as my Argentine colleague observed, scary. While he may clean up some of the bureaucratic mess in the curia, he shows no evidence from his Argentina actions that he will be any more responsive than his predecessor to changing policies and structures that oppress the world’s poor, the majority of whom are women and children.

There is something perverse about opposing condom use and then washing the feet of people with HIV/AIDS. There is something suspect about opposing reproductive health care for women who may not want to get pregnant and then generously insisting on the legal baptism of children whose parents are not married. There is something dubious about calling the hierarchical church to a simpler way of being and ignoring the many women whose ministerial service would enhance its output. The Spanish expression that comes to mind is “what you give with the wrist, you erase with the elbow.” This seems to be the Jesuitical pattern of the new pope.

Lesbian, gay, bisexual, and trans people kill themselves because Catholic hierarchs tell them that their sexuality is “intrinsically morally disordered.” Women die from unsafe, illegal abortions because the Catholic hierarchy spends millions of dollars opposing legislation that would make their choices safer. Survivors of sexual abuse by clergy live tortured lives because the cleric-centric structures of the church favor their abusers. While a few nuns famously ride the bus, the Vatican’s current crackdown on women religious makes most of them feel as if they have been thrown under the bus. Theology does indeed have consequences.

It is early to opine about the pontificate of Pope Francis. Catholics, including this one, are a hopeful lot. Five thousand journalists in Rome for the conclave should have asked more critical questions. My observation is that the recent papal election only serves to reinforce and reinscribe the Vatican’s power. In the absence of a religious counter-narrative, at a time when progressive Catholic voices are all but silenced, the papal theatrics—complete with an appealing hero triumphing in the end—keep the focus on the personal and spiritual, off the political and theological. It is time to reverse that pattern before any more people disappear.