The Vatican’s spokesman came to his press briefing Friday bearing flowers for female journalists to mark International Women’s Day. “On behalf of all of us men, congratulations and happy Women’s Day!” said a beaming Rev. Federico Lombardi. 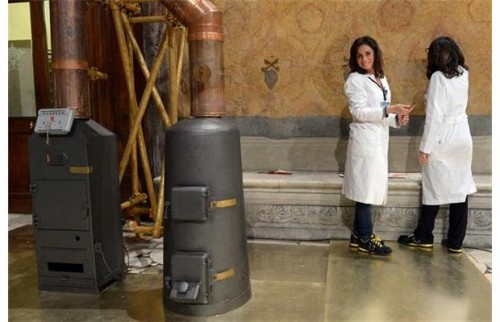 A heartfelt gesture, to be sure, but one that came a day after an awkward acknowledgement: The upcoming election of the pope will be an all-male affair — except for the women who cook for, clean up after and serve the 115 cardinals who will pick the leader of the world’s 1.2 billion Catholics, half of them women.

Lombardi’s admission came when a reporter noted that one of the video clips the Vatican had provided of preparations in the Sistine Chapel featured a woman at a sewing machine, making the skirting for the tables where cardinals will sit. Aside from the seamstress, the reporter inquired, how many women are involved in the conclave process?

Lombardi said the total number wouldn’t be known until all Vatican personnel involved in the conclave take their oath of secrecy. But he noted that several women work at the Vatican’s Santa Marta hotel, where the cardinals will eat and sleep during the conclave, which begins on Tuesday.

For many observers, Lombardi’s comment was a tacit acknowledgment of what many consider women’s second-class status in Catholic Church, despite the fact they take a leading role in staffing Catholic schools, hospitals and other charitable institutions that are the cornerstone of the church’s social outreach.

“It is fine to sew and be a seamstress, but women have much to contribute to the political … health and well-being of the people on the planet,” said Janice Sevre-Duszynska, a member of the Roman Catholic Women Priests movement who says she was ordained a priest in 2008.

She and other members of the women’s ordination movement, as well as other dissident groups calling for greater participation of women in leadership positions in the church, have descended on Rome to try to have their voices heard in the papal election.

Lombardi noted that women’s role in the church was discussed Friday during the pre-conclave meetings that cardinals have attended this week to discuss the problems of the church and who should lead it.

He didn’t provide any details.