Argentina’s Pope Bergoglio a moderate focused on the poor

The first Latin American pope, Argentina’s Jorge Bergoglio is a moderate known for his strong negotiating skills as well as a readiness to challenge powerful interests. 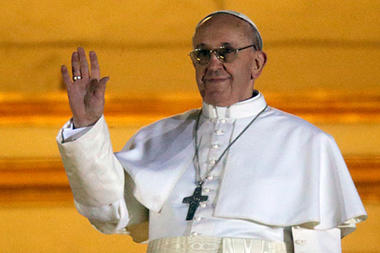 He is a modest man from a middle class family who is content to travel by bus.

Described by his biographer as a balancing force, Bergoglio, 76, has monk-like habits, is media shy and deeply concerned about the social inequalities rife in his homeland and elsewhere in Latin America.

“His character is in every way that of a moderate. He is absolutely capable of undertaking the necessary renovation without any leaps into the unknown. He would be a balancing force,” said Francesca Ambrogetti, who co-authored a biography of Bergoglio after carrying out a series of interviews with him over three years.

“He shares the view that the Church should have a missionary role, that gets out to meet people, that is active…. a church that does not so much regulate the faith as promote and facilitate it,” she added.

“His lifestyle is sober and austere. That’s the way he lives. He travels on the underground, the bus, when he goes to Rome he flies economy class.”

The former cardinal, the first Jesuit to become pope, was born into a middle-class family of seven, his father a railway worker and his mother a housewife.

He is a solemn man, deeply attached to centuries-old Roman Catholic traditions. Since rejecting a comfortable archbishop’s residence, he has lived in a small apartment outside Buenos Aires where he spends his weekends in solitude.

In his rare public appearances, Bergoglio spares no harsh words for politicians and Argentine society, and has had a tricky relationship with President Cristina Fernandez and her late husband and predecessor, Nestor Kirchner.

Bergoglio became a priest at 32, nearly a decade after losing a lung due to respiratory illness and quitting his chemistry studies. Despite his late start, he was leading the local Jesuit community within four years, holding the post from 1973 to 1979.

Bergoglio’s vocational success coincided with the bloody 1976-1983 military dictatorship, during which up to 30,000 suspected leftists were kidnapped and killed — which prompted sharp questions about his role.

The most well-known episode relates to the abduction of two Jesuits whom the military government secretly jailed for their work in poor neighborhoods.

According to “The Silence,” a book written by journalist Horacio Verbitsky, Bergoglio withdrew his order’s protection of the two men after they refused to quit visiting the slums, which ultimately paved the way for their capture.

Verbitsky’s book is based on statements by Orlando Yorio, one of the kidnapped Jesuits, before he died of natural causes in 2000. Both of the abducted clergymen survived five months of imprisonment.

“History condemns him. It shows him to be opposed to all innovation in the Church and above all, during the dictatorship, it shows he was very cozy with the military,” Fortunato Mallimacci, the former dean of social sciences at the Universidad de Buenos Aires, once said.

Those who defend Bergoglio say there is no proof behind these claims and, on the contrary, they say the priest helped many dissidents escape during the military junta’s rule.

But in the Vatican, far removed from the dictatorship’s grim legacy, this quiet priest is expected to lead the Church with an iron grip and a strong social conscience.

In 2010, he challenged the Argentine government when it backed a gay marriage bill.

“Let’s not be naive. This isn’t a simple political fight, it’s an attempt to destroy God’s plan,” he wrote in a letter days before the bill was approved by Congress.