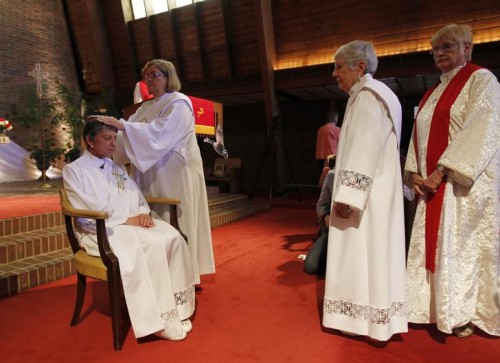 Rosemarie Smead of Bedford, Ky., a retired Indiana University Southeast counselor-education professor, was ordained during the two-hour service hosted by a bishop of the movement, Bridget Mary Meehan.

Several other women priests in the movement, in white robes and red stoles, gathered from around the country to participate in a ceremony patterned on traditional Catholic ordination liturgy but suffused with feminist imagery. About 200 people attended the service at St. Andrew United Church of Christ, most of them coming forward to lay hands on Smead in blessing.

The Vatican has stated that as a matter of unchangeable doctrine, the Roman Catholic Church must follow the example of Jesus, who appointed only men as his apostles.

It says anyone who participates in a ceremony purporting to ordain a woman is automatically excommunicated. Louisville Archbishop Joseph Kurtz reiterated that stance in a statement saying the association has no connection to the Roman Catholic Church and that Catholics should not support or participate in Saturday’s event.

Janice Sevre-Duszynska of Lexington, Ky., a priest in the women’s ordination movement, gave opening remarks Saturday, saying there is archaeological and documentary evidence that the early church ordained women — interpretations that have been disputed by supporters of male-only ordination.

Meehan said the decade-old Women Priest movement is an act of justice defying what she called an unjust Vatican law. She said the movement’s bishops were ordained by an unidentified bishop in communion with Rome.

“Sexism in church and society is sinful and should always be challenged,” Meehan said. She said if women were in Catholic leadership, the church’s position against artificial birth control would be lifted.

The liturgy included invocations to numerous female Catholic saints, to God as mother and father and to “Christ-Sophia,” invoking a biblical term for divine wisdom that service leaders said reflects the feminine aspect of God.

After a series of solemn ordination vows, Smead prostrated herself before the altar for several minutes during quiet music and prayer. Participants presented Smead with ceremonial vestments of priestly ministry, and Meehan anointed her hands with oil.

“You’re in for quite a spiritual adventure,” Meehan told Smead.

“It’s just so overwhelming,” Smead said afterward. Smead, who previously lived as a cloistered nun, marched for civil rights and worked for years with troubled youth in Alabama before a quarter-century career at IUS, said the ordination “just raised up 70 years of longing in me to be able to fulfill this.”

Two of Smead’s former IUS students gave testimonials during the ordination, lauding her for providing career and personal guidance, and a niece, nephew and in-law of Smead read Scriptures.

The Rev. Jimmy Watson, pastor of St. Andrew, said the church agreed to host the service after considering a passage in the book of Acts in which the apostle Peter was told by God to bring the gospel to Gentiles.

“I knew there would be some pressure not to do something so illegal,” Watson said. “… We decided that we could not stand in God’s way.”