Detroit Catholic leaders, one a legal adviser to the Vatican, suggest those who support gay marriage be denied Communion. Compare this to news that the Vatican collaborated with another murderous dictator.

A Detroit professor and legal adviser to the Vatican says Catholics who promote gay marriage should not try to receive holy Communion, a key part of Catholic identity. 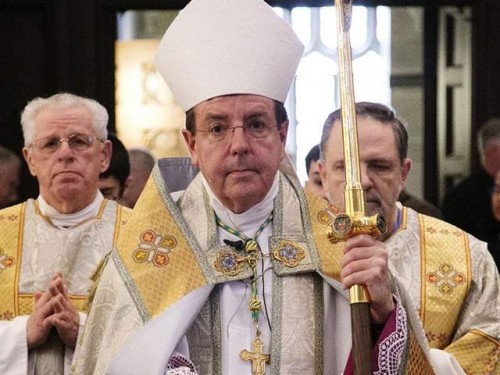 And the archbishop of Detroit, Allen Vigneron, said Sunday that Catholics who receive Communion while advocating gay marriage would “logically bring shame for a double-dealing that is not unlike perjury.”

The comments of Vigneron and Edward Peters, who teaches Catholic canon law at Sacred Heart Major Seminary in Detroit, are part of a polarizing discussion about gay marriage that echoes debate over whether politicians who advocate abortion rights should receive Communion.

In a post on his blog last week, Peters said that Catholic teachings make it clear that marriage is between one man and one woman. And so, “Catholics who promote ‘same-sex marriage’ act contrary to” Catholic law “and should not approach for holy Communion,” he wrote. “They also risk having holy Communion withheld from them … being rebuked and/or being sanctioned.”

Peters didn’t specify a Catholic politician or public figure in his post. But he told the Free Press that a person’s “public efforts to change society’s definition of marriage … amount to committing objectively wrong actions.”

Peters, an attorney and the Edmund Cardinal Szoka chairman at Sacred Heart, was appointed by Pope Benedict XVI in 2010 to be a referendary of the Apostolic Sinatura, which means he helps advise the top judicial authority in the Catholic Church. Peters’ blog, “In Light of the Law,” is popular among Catholic experts, but not everyone agrees with his traditional views.

“Most American bishops do not favor denying either politicians or voters Communion because of their positions on controversial issues,” said Thomas Reese, a Catholic priest and senior fellow at the Woodstock Theological Center at Georgetown University. Reese said that Peters’ views are “in a minority among American canon lawyers.”

But, Reese added, “about 30 or so bishops have said that pro-choice or pro-gay-marriage Catholics should not present themselves for Communion.”

Peters has said before that liberal Catholic Democrats, such as U.S. Rep. Nancy Pelosi of California and New York Gov. Andrew Cuomo, should be denied Communion because of their statements and positions.

In 2011, Peters said that Cuomo should not receive Communion because he is an outspoken proponent of gay marriage. Last month, Peters said, “Pelosi suffers from one of the most malformed consciences in the annals of American Catholic politics or … she is simply hell-bent on using her Catholic identity to attack Catholic values at pretty much every opportunity.”

In 2002, Catholic Jennifer Granholm’s support of abortion rights became an issue in the gubernatorial race a month before the election, when Detroit Cardinal Adam Maida released a letter saying Catholic politicians had a “special moral obligation” to oppose abortion.

Last month, Vigneron said at a news conference that maintaining views that oppose abortion and support traditional marriage are important for Catholics.

“Were we to abandon them, we would be like physicians who didn’t tell their patients that certain forms of behavior are not really in their best interest,” said Vigneron, who oversees 1.3 million Catholics in southeastern Michigan.

On Sunday, Vigneron said about supporting gay marriage and receiving Communion: “For a Catholic to receive holy Communion and still deny the revelation Christ entrusted to the church is to try to say two contradictory things at once: ‘I believe the church offers the saving truth of Jesus, and I reject what the church teaches.’ In effect, they would contradict themselves. This sort of behavior would result in publicly renouncing one’s integrity and logically bring shame for a double-dealing that is not unlike perjury.”