In Munich, Germany, a once-aspiring priest is allegedly spreading his love around as a very popular sperm donor to lesbian couples as a way, he says, of getting “quiet revenge” on the church for denying him his vestments.

By Lester Brathwaite
Markus K. has never slept with a woman, but since fathering his first child nine years ago with a lesbian couple, he hasn’t been able to stop impregnating them. It all started in 1994. Friends had taken the U.S. by storm and Markus decided to do the same to some German ovaries. He had been in seminary in hopes of becoming a priest, but he was forced to leave because he was gay. 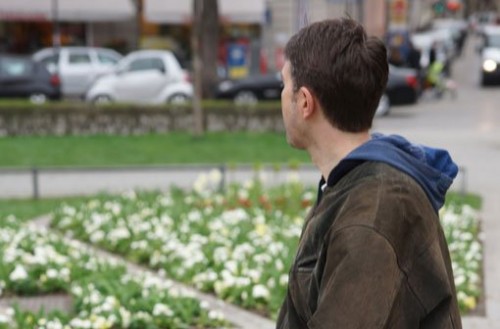 “Six years of theology, the Latinum Graecum, Hebraicum, all for naught,” Markus told the Munich Evening News. “My life was at a low point.”

You know what always cheers us up? Ejaculating into a paper cup. Markus felt the same way after seeing a note on the wall from a lesbian looking for a sperm donor. Big mistake. The woman was a bit of a whack — “she wore her first menstrual blood in an amulet around the neck, stuff like that” — but luckily his check bounced, as it were.

Then in 2003, a few years older and wiser and wealthier (he works in insurance) Markus answered an ad from a lesbian couple. Once he met them, he felt they would be good parents. Two attempts and nine months later he had a son. What’s more he didn’t charge the women so it was literally a gift of life.

Once word spread that Markus’ sperm took the HOV-lane to the uterus without paying a toll – well, let’s just say it’s a wonder he’s not incapacitated by severe carpal tunnel. Women just come to his apartment, he gives them the…stuff in a cup and then they go into a separate room to self-baste. See, nothing shady or strange about it. Sure, some of the ladies might “do a headstand after” but “others simply lie down and fall asleep.”

Now 45, Markus has 22 sons and daughters — 12 in Munich, one in Vienna, one in Tuscany, six scattered throughout the rest of Germany and two still on the way. With the birth of the two this summer, he’ll have 12 boys and 12 girls — then he might give it a rest.

The hectic seed-spreading schedule he’s been keeping over the last ten years has taken its toll on Markus’ love life. Turns out guys aren’t lining up to date a guy with more kids than pairs of shoes. His last boyfriend wasn’t too keen on having to deal with Markus’ 17 women and all of his fatherly commitments. Even with all those kids in different places, Markus is no deadbeat dad. He makes sure to see all of them for their birthdays and meets with five of the families every four weeks.

When one of his five-year-olds asked him how many other kids he’s been competing with, Markus began to wonder what other questions will be asked of him once his kids grow up — such as “why?”

“Probably a mix of help, reproductive instinct, loneliness and quiet revenge on the church. I can not be a priest as a gay man,” he said, “but I can reproduce myself as often as I want.”