File under: Say it ain’t so! Financial irregularities? In the Catholic Church? Can’t be!

A pension fund for priests cited as a priority in a $200 million fund-raising campaign by the Archdiocese of Philadelphia has fallen precariously short of money, and church officials want parishes and retired clergy to help cover the shortfall. 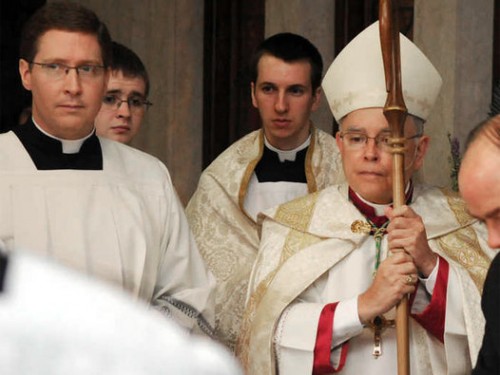 In meetings this spring, Archbishop Charles J. Chaput told priests the plan had been underfunded, poorly managed, and was spent on rising health-care costs for clergy, according to three priests who attended or were briefed on the talks. Chaput said the fund needed $90 million to be solvent but had less than $4.5 million, they said.

Clergy living at the archdiocese’s Delaware County retirement villa and other church-owned facilities are expected to contribute 40 percent of their pensions to the archdiocese, the priests said. And parishes’ annual assessments to the pension fund will rise from $6,700 to about $9,300 per priest, they said.

The changes come two years after the archdiocese ended a fund-raising campaign that made shoring up the priests’ pension plan one of its goals.

Kenneth Gavin, a spokesman for the archdiocese, said the policy requiring priests in church-owned facilities to refund portions of their pensions started in April. He would not discuss other changes or aspects of the pension plan, including what the archbishop said in his private meetings with clergy.

Gavin said the archdiocese planned to release “detailed financial reports” about its spending and costs this summer.

Rumblings about the pension troubles started last year, catching some priests by surprise.

“I was certainly horrified to learn that our pension fund was not secure, as would be any person who works in any organization,” said the Rev. Christopher Walsh, pastor of St. Raymond of Penafort in Mount Airy.

Walsh, who helped organize a fledgling association for archdiocesan priests, did not attend the meetings but said he learned about them from others who did. He said he hoped Chaput and his staff would “quickly establish a secure pension fund as a matter of justice.”

Dioceses across the country have faced similar financial struggles in recent years, compounded by dwindling attendance, aging clergy, and the economic downturn. But the impact has been acute in Philadelphia, where more than a million Catholics and hundreds of priests are also grappling with the fallout from clergy sex-abuse allegations. “The caveat for priests was always that the diocese was going to take care of you,” said one Philadelphia pastor nearing retirement who asked not to be identified discussing his employer’s finances. “None of us knew when Chaput arrived here 20 months ago that the diocese was in this bad of shape.”

Chaput himself didn’t know it, he conceded in an interview with The Inquirer in the fall. Only after moving from Denver in 2011, he said, did he realize that his predecessors in Philadelphia had relied on deficit-spending budgets for 15 years.

His tenure since has included a drumbeat of grim financial decisions: shuttering schools, closing or merging parishes, and selling off assets, including the cardinal’s residence on City Avenue and an oceanfront home for clergy in Ventnor, N.J.

The archdiocese has 425 active priests, most living in rectories and other church-owned facilities across the region. It also counts 161 retired priests on its rolls, and cares for many of them. If they remain healthy, priests typically retire at age 75 and qualify for an annual pension worth half their final salary, usually about $12,000, clergy members said.

Some leave to live with relatives or on their own in private homes. Others live in parish rectories, or at Villa St. Joseph, a church-owned retirement complex in Darby. But some of the older archdiocesan priests never registered for Social Security, and they end up retiring without a guaranteed government check or medical benefits, priests said.

Adding to the pension fund was one of six goals highlighted during the “Heritage of Faith, Vision of Hope” fund-raising campaign launched in 2009.

“Established in the early 1990s, the priests’ pension plan currently has over $10 million in assets,” literature for the campaign said. “In order to meet the anticipated needs of our retired priests, the pension plan requires an additional $40 million.”

That campaign sought $12 million for the pension plan and $3 million for renovations at Villa St. Joseph.

When it ended in early 2011, the campaign had yielded pledges of more than $220 million, church officials said. Earlier this year, they publicly acknowledged that collections on those pledges had fallen short, and they downgraded their projected receipts to less than $180 million.

Gavin, the spokesman, said $4 million in Heritage of Faith donations were transferred into the priest pension fund on Jan. 31. But he declined to elaborate or discuss updated totals for the rest of the money collected and spent, a topic the archdiocese is expected to address in its report this summer.

One suburban pastor said the redemption rate on pledges “took a dive” soon after the campaign ended, about the same time a Philadelphia grand jury report led to the arrest of four current or former priests and the suspension of two dozen others accused of child sex abuse or misconduct.

In his meetings with clergy, the archbishop specifically denied that their pension funds had been used to cover costs related to the suspensions or ensuing investigations, some of which are still open, the priests said.

Last year, Chaput reported that the archdiocese had spent more than $11 million through June 2012 related to those cases.

The abuse and misconduct allegations have had at least an indirect impact, pushing more priests into early retirement. Priests who have agreed to leave public ministry and accept a life of “prayer and penance” after being accused of sexual abuse or misconduct are eligible to collect their pensions, according to information on the archdiocese’s website. At least 19 priests are now living under such restrictions, most on the same campus as Villa St. Joseph’s.

At least 25 other priests from the Archdiocese of Philadelphia have been laicized or voluntarily left the priesthood in the last decade. Church officials have not disclosed how many of those defrocked priests, some of whom were in the clergy for decades, collect a pension.

Earlier this month, Gavin declined another request for that information.

One pastor who attended a meeting with Chaput said he believed the archbishop was doing everything possible to keep them informed and find solutions to the financial mess he inherited. “I have total confidence that we’ve been given a correct and honest appraisal of things,” the priest said. Rita Schwartz, union president for non-religious teachers in archdiocesan schools, said she had heard about the troubles with the priests’ pensions, but was confident that pensions for archdiocesan teachers, which are managed through a separate trust, were stable.

Clergy pension funds have plunged in Boston and other dioceses, according to Charles Zech, who directs the center for the study of church management at Villanova University. Zech said he had not examined the financial situation in Philadelphia but wasn’t surprised to hear about the pension-fund troubles.

This archdiocese, he said, seems to have been battered by “a perfect storm of bad things happening at once.”

Correction: This story was corrected to reflect that the $11 million cost to the Archdiocese stemming from the sexual abuse scandal was not covered by insurance.