File under: When the people lead the leaders will have to follow.

Parishioners from St. Andrew Catholic Church, which has a longstanding commitment to social justice issues, will march in Sunday’s Portland Pride Parade with a banner proclaiming their parish identity, despite the wishes of Archbishop Alexander K. Sample. 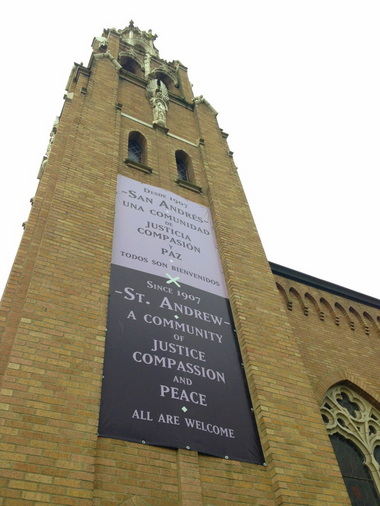 At least four Catholic parishes are expected to participate in the parade, according to the Rev. Tara Wilkins, executive director of the Community of Welcoming Congregations. Members of St. Francis of Assisi, St. Philip Neri and St. André Bessette (the Downtown Chapel) also are expected to march. In the past, they have carried parish banners, Wilkins said.

Monsignor Dennis O’Donovan, vicar general of the Archdiocese of Portland, called St. Andrew’s pastor, the Rev. Dave Zegar, on May 31 on behalf of Sample, parishioners say. O’Donovan relayed the message that individuals could walk in the parade but that the archbishop did not want St. Andrew’s members to walk as a community.

Sample, who was installed as archbishop April 2, is in San Diego to attend the annual summer meeting of United States bishops, according to Bud Bunce, spokesman for the archdiocese. He could not be reached for comment.

Bunce confirmed that O’Donovan had made the phone call. While the archdiocese respects all people, Bunce said, “this was not an event that St. Andrew’s parish could be in as a parish.”

On June 4, Zegar met with a group of St. Andrew’s parishioners, who decided to stand by their 17-year commitment to Portland’s gay community. At Mass on Sunday, Zegar shared the group’s decision with the congregation, who responded with a standing ovation, according to Tom Karwaki, who chairs the parish’s pastoral council.

The Rev. Steve Newton, a Holy Cross priest who is pastor of St. André Bessette, said no one from the archdiocese had called him about the parade. Parishioners from the Downtown Chapel have walked in the parade for years.

“The Catholic Church supports gay people, even though there is a broad difference of opinion on their lifestyle,” Newton said.

At St. Andrew’s on Sunday, a bulletin insert recounted the history of the parish’s welcoming ministry. A formal committee began meeting in 1996. St. Andrew’s helped staff a booth at Portland Pride in 2000, and members began marching with their banner, which reads “Welcoming the Whole Family,” in 2001.

Susan Kelly, a member of St. Andrew’s since 1969, said the move to become a welcoming congregation was partly due to a respected couple within the church who were parents of identical twin girls. The twins “came out” in high school, and their parents agonized over how the church would react. The mother finally confessed to a friend at St. Andrew’s.

“It got us all thinking about how we deal with this issue,” Kelly says. “How can we reach out and get over this Christian – not just Catholic –attitude that if you’re gay or lesbian, you’re not part of the community?”

The official teaching of the Catholic Church is that homosexual acts are contrary to natural law and incompatible with living a Christian life. But 2006 pastoral guidelines from the U.S. Conference of Catholic Bishops say the church must welcome homosexuals to full and active participation in the faith. St. Andrew’s bulletin insert quoted the document.

How many feel unwelcome became evident Thursday when the Pew Research Center released the findings of an April survey on the religious attitudes of lesbians, gay men, bisexuals and transgender adults. Eight in ten adults said the Catholic Church, along with Islam and the Church of Jesus Christ of Latter-day Saints, were “unfriendly” to the LGBT community.

Kelly summarized the reasons that parishioners are insisting on carrying their banner in one word: visibility.

Joy Wallace, a member of St. Andrew’s since 1998, says it is common for members of the gay community and their advocates to seek out St. Andrew’s because they’ve seen the parish represented in the annual Pride Parade.

“The banner is important because it says we are a community of faith,” says Jane Braunger, a parish member since the 1980s. “For us not to embrace this statement as a core commitment about openness and acceptance and living the Gospel is cowardly.”

Karwaki said parishioners would like a chance to talk to the archbishop about their ministry and explain their commitment to the Pride Parade. He says Zegar asked for such a dialogue and the parish is drafting a letter to Sample.

“We’re not acting out of disobedience,” Karwaki said. “We’re acting out of obedience to the Gospel and the mission of this parish.”