THE Vatican is bracing itself for a rent boy scandal after a convicted pedophile priest apparently sought vengeance by informing on other child abusers in the Roman clergy. 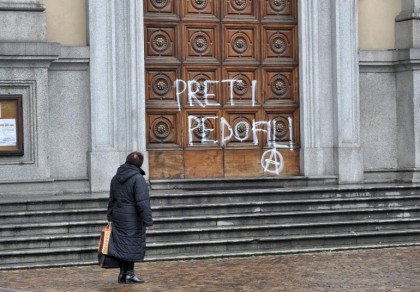 Don Patrizio Poggi, who served a five-year sentence for abusing five 14 and 15-year-old boys at his parish on the outskirts of the Italian capital, has reportedly handed names to police. So far, four people have formally been placed under investigation by Rome magistrates.

The suspects are said to include a monsignor who is currently the secretary of an important bishop. Also being investigated is a former Carabinieri police officer suspected of recruiting under-age boys for the alleged prostitution ring.

The brewing scandal comes just weeks after Pope Francis confirmed the existence of a “gay lobby” in the Vatican to a visiting Latin American church group.

The apparent network inside the supposedly celibate and staunchly anti-homosexual Church is one reason why Pope Francis is working on a thorough house-cleaning of the Roman curia. Vatican watchers believe a far-reaching reshuffle of top posts is imminent. Cardinal Giuseppe Bertello, current head of the governorate that runs the Vatican city-state, is tipped to take over from the powerful but divisive Vatican secretary of state, Cardinal Tarcisio Bertone.

The latest scandal traces its roots to the criminal case against Poggi, now 46, who was convicted in 1999 of abusing boys at his St Philip Neri church in the Rome suburb of Primavalle.

After serving his sentence, the disgraced priest sought reinstatement by the Vatican but was denied a post. In revenge, he is said to have gone to police with one of the alleged “rent boys” serving priests.

According to Italian press reports, Poggi named 20 people as being involved in the prostitution ring.