File under — Who says there ain’t a God?

Ex Pope Benedict says God told him to resign his position as Pope during a months-long “mystical experience” he had. When asked why he gave up his position, he said “God told me to.” While denying he had heard voices or saw an apparition of any kind, he explained that God gave him an “absolute desire” to give up being pope and spend the rest of his life praying in completely secluded private Vatican apartments. He claims the “will of God” was correct after seeing what an excellent job Pope Francis has been doing. 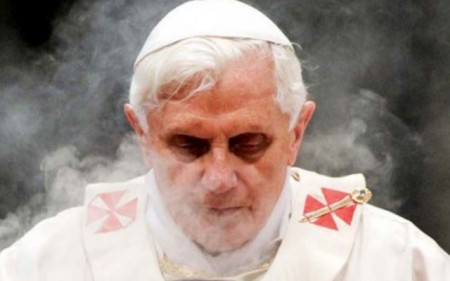 A Vatican spokesman told The Guardian UK that the original report by Zenit, a Catholic news organization, is correct. “The report seems credible,” the spokesman said. “It accurately explains the spiritual process that brought Benedict to resign.”

However, at the time of his resignation, Pope Benedict claimed that he was abandoning the position because of his rapidly declining health. At a meeting of Cardinals, he said “My strengths, due to an advanced age, are no longer suited to an adequate exercise of the Petrine ministry.”

Some are skeptical of Benedict’s “mystical experience” claim and point to the fact that there have been extensive reports of a secret Vatican “gay lobby” whose influence was getting totally out of control. Current Pope Francis admitted to this powerful lobby just a few months ago and said he was planning on addressing it. He later came out and said he “would not judge” gay priests, leaving some to wonder if any action would be taken against the alleged lobby.

However, others feel that it was Benedict’s health alone which prompted his resignation, and one journalist who had met with him just prior to his leaving the papacy said Benedict looked “exhausted.” Benedict is 86 years old and has had numerous health problems in recent years, including a heart condition that required the installment of a pacemaker.

Other theories about his resignation include the scandal that broke recently about a top secret “rent boy” ring that was run by numerous priests inside Vatican City, in which they would hire underage male prostitutes to satisfy the sexual needs of their fellow Cardinals.

Perhaps the most controversial theory of all is that Benedict may be gay himself. That allegation comes, in part, from prominent Catholic blogger Andrew Sullivan. In a post entitled “Two Popes, One Secretary,” Sullivan implies that Benedict’s current arrangement with his male secretary, Monsignor Georg Gänswein, is very strange, saying “So Benedict’s handsome male companion will continue to live with him, while working for the other Pope during the day. Are we supposed to think that’s, well, a normal arrangement?”

Sullivan quotes another writer, Angelo Quattrochi, who discusses whether Gänswein’s relationship with Benedict could be more than professional:

When asked if he felt nervous in the presence of the Holy Father, Gänswein replied that he sometimes did and added: ‘But it is also true that the fact of meeting each other and being together on a daily basis creates a sense of “familiarity”, which makes you feel less nervous. But obviously I know who the Holy Father is and so I know how to behave appropriately. There are always some situations, however, when the heart beats a little stronger than usual.’… This man – clearly in some kind of love with Ratzinger (and vice-versa) will now be working for the new Pope as secretary in the day and spending the nights with the Pope Emeritus. This is not the Vatican. It’s Melrose Place.

So which is the real reason for Benedict’s resignation? A secret “Gay Lobby?” A “Mystical experience?” Health problems? A ring of “rent boys” in the Vatican? The only person who knows the true answer is Benedict himself, and his current claim is “God told me to.”