The Rev. Tom Pivinski helped Asbury Park greet marriage equality by performing ceremonies for three same-sex couples this morning, and he and his long-term male partner have taken out a license as well.

The Roman Catholic Church may not accept same-sex marriage, but one of its retired priests was happy to perform ceremonies for gay and lesbian couples in Asbury Park, N.J., as marriage equality became law in the state today. And he intends to marry his same-sex partner as well. 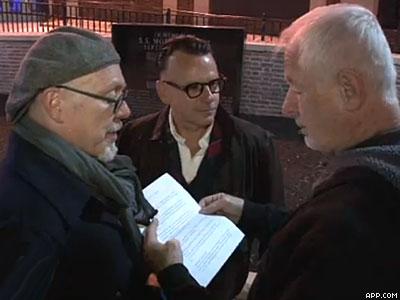 The Rev. Tom Pivinski, who now works with an Episcopal church in Asbury Park, officiated vows for three couples on the steps of the Paramount Theater in the beach community shortly after midnight, the Asbury Park Press reports. One of the couples he wed, Karen Nicholson-McFadden and Marcye Nicholson-McFadden, were plaintiffs in the lawsuit that led to marriage equality in New Jersey. He also performed a joint ceremony for City Council member Amy Quinn and her partner, Heather Jensen, and for Steven Brunner and Daniel Baum.

“I think it’s wonderful,” Pivinski told the Press. “I am just very grateful that the state has recognized the equality of all people.” Pivinski and his longtime partner, Malcolm Navias, applied for a license Friday with the intention of marrying today, according to another local news outlet, the Asbury Park Sun.

Same-sex marriages became possible in New Jersey after the state Supreme Court Friday refused to delay a lower court judge’s ruling that such marriages should begin today. The court was to hear Gov. Chris Christie’s appeal of the ruling in January, but this morning Christie dropped the appeal.