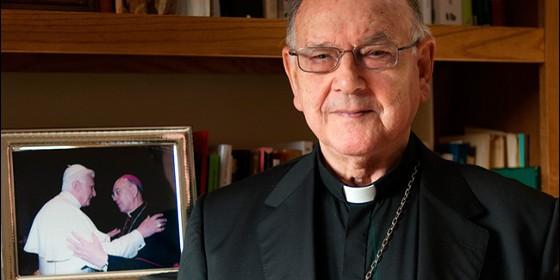 “A lot of people complain and don’t tolerate it but with all respect I say that homosexuality is a defective way of manifesting sexuality, because that has a structure and a purpose, which is procreation,” Sebastian told Malaga newspaper Sur.

The interview was published Sunday, a week after the Spaniard was named as one of 19 new cardinals chosen by the pope, to be officially appointed February 22.

“We have a lot of defects in our bodies. I have high blood pressure. Am I going to get angry because they tell me that? It is a defect I have that I have to correct as far as I can,” said Sebastian, who is the archbishop emeritus of the northern city of Pamplona.

The archbishop was asked in the interview if he shared the view of Pope Francis, who said in July last year: “If someone is gay and seeks the Lord with good will, who am I to judge?”

The Spanish archbishop, who, because of his age, will not hold a vote in the conclave that elects pontiffs, said the pope shows respect to all people but is not changing the teaching of the Church.

“It is one thing to show welcome and affection to a homosexual person and another to morally justify the exercise of homosexuality,” he said.

Gay and lesbian rights group Colegas called on the archbishop to retract his comment.

“We hope that Fernando Sebastian will correct his words and we note that homosexuality is not a curable disease, but homophobia is,” it said in a statement.

“It is not the first time the cardinals have said we are defective,” he said, calling for non-discrimination legislation that would condemn such “repugnant” statements.