At a joint press conference today, United Methodist Bishop Martin McLee and Rev. Dr. Thomas W. Ogletree announced that the church was dropping the case against Dr. Ogletree for officiating at his son’s wedding. In a huge victory for the Methodist movement that is organizing ministry to all couples on an equal basis in open defiance of church law, the bishop dropped the case without any conditions. Furthermore, Bishop McLee said in his statement “I call for and commit to cessation of trials,” the first time ever a sitting United Methodist bishop has categorically declared he will not prosecute pastors for ministering to LGBTQ people. 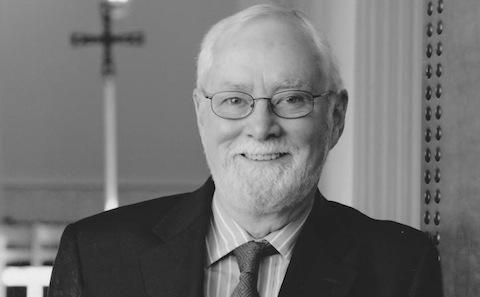 “I am grateful that Bishop McLee has withdrawn this case and the church is no longer prosecuting me for an act of pastoral faithfulness and fatherly love,” said Dr. Ogletree. “But I am even more grateful that he is vowing not to prosecute others who have been likewise faithful in ministry to LGBTQ people. May our bishop’s commitment to cease such prosecutions be the beginning of the end of the United Methodist Church’s misguided era of discriminating against LGBTQ people.” Ogletree, a past dean of both Yale Divinity School and Drew Theological Seminary, a scholarly expert in Christian ethics, and an author of a section of the UMC’s Book of Discipline, began his service to the church in 1952, a time when Methodist rules barred women from serving as clergy and segregated African Americans into a separate central jurisdiction.

The decision to drop the case was satisfactory to Dr. Ogletree (who under UMC law had the right to insist on a trial to adjudicate his case) because it did not require him to say he would not conduct same-sex weddings in the future, nor did it in any way frame what he did as “wrong.” Rather, the bishop’s statement acknowledges that church trials “continue the harm brought upon our gay and lesbian brothers and sisters” and invites Dr. Ogletree to “a public forum on the true nature of the covenant that binds us together,” where he can tell his story about why he performed this wedding and how he understands that act to be consistent with the Wesleyan tradition and Christian ethical principles.

“This resolution completely vindicates Tom,” said Dr. Dorothee Benz, the spokesperson for Ogletree and chair of Methodists in New Directions, which provided Ogletree’s legal defense. “While it is good that Tom will not have to stand trial for saying ‘yes’ when his son asked ‘Dad, will you do my wedding?’ it is important to remember that trials are not the problem in the United Methodist Church, they are merely the symptom. The problem is the wholesale condemnation of gays and lesbians as ‘incompatible with Christian teaching’ and the systematic discrimination against us and those who would dare to minister to us.

“The declaration that he will no longer prosecute pastors like Tom who refuse to deny ministry to LGBTQ people is a bold act of leadership for our bishop, whose longstanding support herewith takes a new step that mirrors our own refusal to follow discriminatory laws,” Benz added.

With the agreement announced today, Bishop McLee joins a small but growing number of U.S. bishops who are openly breaking with their colleagues’ insistence on enforcing the UMC’s anti-gay discriminatory rules. In October 2013 retired Bishop Talbert became the first bishop to preside at a same-sex wedding. After the Council of Bishops voted to direct two of its members to file a formal complaint against Bishop Talbert, four bishops took the unprecedented step of issuing statements publicizing their dissent in that vote. In December, after the Eastern Pennsylvania Board of Ordained Ministry moved to strip Frank Schaefer of his ministerial credentials, Bishop Minerva Carcano publicly offered him a job as a pastor in the California-Pacific Annual Conference.

Bishop McLee’s actions today go farther than any other active bishop has gone thus far in that they publicly commit him to a policy of not punishing pastors for their ministry to LGBTQ people.

Tom Ogletree’s case began in October 2012, when a complaint was filed against him after his son’s wedding was listed in the New York Times wedding announcements. A formal just resolution process followed, in which Ogletree made clear that a promise to never do another same-sex wedding was not a condition he could accept, and in March 2013, Bishop McLee referred the case to counsel for the church. Formal charges against Tom were filed in January 2014, and Tom was notified of the charges and the trial date (March 10) on January 16. He has been represented by Rev. Scott Campbell and Rev. Paul Fleck, who are members of MIND’s legal team.

While the resolution is a victory for the movement to end UMC discrimination and a vindication for Ogletree, it cannot undo the strain he and his family endured during the 16 months that the case was pending.