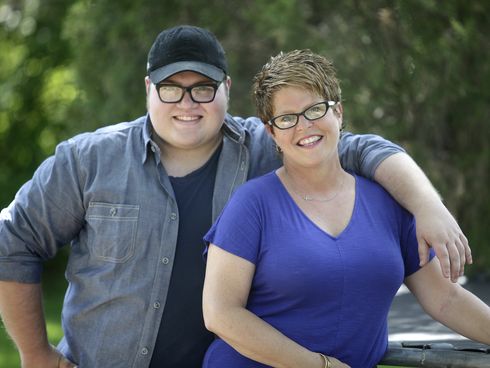 Veteran Catholic teacher Molly Shumate stared at the Cincinnati Archdiocese contract for next school year and thought of her son.

She remembered when a nervous Zachery Shumate, a teenager at the time, approached her and revealed his homosexuality.

His revelation prompted the first-grade teacher to give him a hug, telling her boy she would always love and support him.

So when the new teachers’ contract – strictly forbidding public support of homosexuality – was handed to her earlier this year, she was torn.

The employment contract – exclusively obtained and reported by The Enquirer in March – continues to divide huge sections of the region’s Catholics. The “morality” clauses – though not unique among Catholic schools nationwide – were a first for the 19-county Archdiocese school system.

It ignited a raging public battle, including a protest march Downtown and online petitions signed by thousands. And this week, 12 billboards opposing the contract dot the area. As the controversy grows, so too does interest around the country.

For Molly Shumate, the battle lines have surrounded her family.

Though a lifelong Catholic and devoted teacher, the lengthy contract’s starkly detailed restrictions on her personal life – and the freedom to publicly support her now 22-year-old son – stunned her.

“In my eyes there is nothing wrong with my son. This is what God gave me and what God created and someone I should never be asked to not support,” she said from her Butler County home.

“If my son were to say to me, ‘will you go somewhere with me that is supported or run by gays and lesbians,’ I would have to tell him no, according to that contract. And if my picture was taken, what would happen?” she said.

So for the first time in 14 years of teaching, Shumate will not be signing the Archdiocese’s teacher employment contract for next school year. And when the last class bell at her Hamilton County school rings out the finish of the school year later this month, it will also toll the end of her Catholic teaching career.

She is the first Archdiocese teacher to make a public stand but those opposing the contract predict more will step forward once the school year ends later this month.

“For me to sign this (contract), I feel like I would be telling my son I’ve changed my mind, that I don’t support him as I did. And I won’t do that,” she said.

Archdiocese officials remain steadfast in their support of the new contract.

Moreover, they contend some of the protests, which have attracted ancillary campaigns for private teacher employment rights, school unions and critics of the church’s policies are based on misunderstandings. Officials say much of the opposition is based on over reactions to the newly detailed personal morality provisions and how, in some circumstances, they may lead to teacher firings.

The contract – double its predecessor’s size – includes provisions that for the first time details prohibited practices such as gay “lifestyles” or public endorsements of homosexuality, out-of-wedlock relationships, abortions and fertility methods that go against Catholic teachings.

Each of the Archdiocese’s more than 2,200 teachers must sign the contract before the end of the school year if they want to remain employed. The employment agreement explicitly orders them to refrain “from any conduct or lifestyle which would reflect discredit on or cause scandal to the school or be in contradiction to Catholic doctrine or morals.” It also bans public support of the practices.

“It’s a bit frustrating to us that some of the organized opposition to our new contract language has misstated its intentions and its implications,” said Cincinnati Archdiocese spokesman Dan Andriacco.

“First of all, nobody who signed this year’s contract or last year’s contract should hesitate to sign the 2014-2015 agreement. All say the same thing – that the teacher will not publicly act or speak against the teachings of the Catholic Church,” said Andriacco.

Rigg has stated “our culture is changing rapidly in this area, and many of our school employees, including me, have family members who are lesbian, gay, bisexual or transgender. The contract does not stipulate that relationships of love for LGBT relatives should be severed.

“As Christians, we are called to love and serve all people … while the Church’s stance on homosexual marriage is well known, this does not mean that our teachers will be asked to cast away loved family members,” said Rigg.

But that is exactly what teachers are being asked to do, complains Tim Garry Jr., a local attorney who opposes the contract language.

In April Garry met with Archdiocese officials in an attempt to get them to modify the contract, to no avail.

Garry provided The Enquirer with the latest response from church officials to his request to meet and review his suggestions on altering the wording of the contract.

“The Archbishop does not believe that any further meeting regarding the teacher … contract is warranted,” according to a May 1 letter from Robert Reid, director of human resources for the Cincinnati Archdiocese.

Garry said the lack of discussion is frustrating.

“We’re attempting to help the teachers to have a voice in their contract,” he said.

“I doubt there is a more important contract in the Archdiocese, impacting more people, teachers, students and parents, than this contract with 2,200 or more teachers, 43,000 or so students and their parents.”

But he adds “the leadership of the Archdiocese of Cincinnati is not a democracy, and there has been little to no indication that it will voluntarily respond favorably to any request for change to their Catholic School teachers’ contract, no matter how reasonable or modest those changes might be.”

The 12 billboards were paid for by the Cincinnati Voice of the Faithful, which for more than a decade has criticized the church’s alleged lack of transparency and accountability regarding the sexual abuse of children.

The group’s coordinator, Kathy Weyer, said “we believe that the Cincinnati Archdiocese is being dishonest with the teachers by suggesting that the changes to the wording and job description of the teacher … contract are not that much different from past years. What is really happening is that the church is protecting itself from possible future lawsuits.”

Zachery Shumate drapes an encouraging arm on his mother’s shoulder and praises the “courage” of her public stance as one of the first teachers to quit in protest.

“It’s hard to put into words how proud I am of her,” he said. “For her to step into the public eye like this and go against the (church) … because she has a gay son speaks volumes about the kind of person she is.”