Hundreds of students at a San Francisco Catholic school wore ties to class Friday to protest an administrative decision to keep the graduation photo of a female student wearing a tuxedo out of the yearbook. 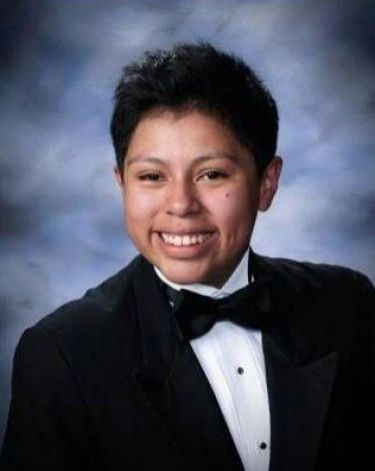 The outcry became contagious as word spread across social media and support for Sacred Heart Cathedral Preparatory senior Jessica Urbina flowed in from around the world.

Late in the day, school officials said the events had “sparked a campus-wide dialogue which will result in a revision of policy.” The statement made no mention of changes to the class of 2014’s yearbook.

A beaming Urbina, who along with girlfriend Katie Emanuel wore a tie to school Friday, told reporters, “I’m appreciative of everything, like really I’m so frickin’ glad that my fellow classmates are rallying behind me. I’ve ever felt more love than I do right now.”

She added, “I’ve seen people with all the ties. Honestly, I’ve cried multiple times, overwhelmed with all this support, so I just want to thank everybody who’s supporting me right now.”

It was unclear when the school made the decision not to publish the photo in the yearbook, but Urbina’s brother, Michael, and classmates started the social media campaign Thursday evening. He tweeted his support Thursday: “As a former SHC student, feminist, LGBTQIA ally, and most importantly, a BROTHER, I stand in solidarity with my sister, 110% #JessicasTux”

After hours of silence, school officials released a statement Friday afternoon: “With each of our students we strive to affirm the value, worth and intrinsic dignity of all, and to foster a supportive and nurturing learning environment. The resulting meaningful discourse and reflection on the practices and policies of the school are at the heart of our mission as an inclusive, Catholic community of faith.”

Many of the students who wore ties and bow ties of all colors – and at least one tuxedo shirt – said they couldn’t comment because administrators told them not to talk to the media, but some did express opinions.

“I believe it’s right to show herself for who she really is,” said junior Erik Wassmer as he walked between the school’s two buildings in the Cathedral Hill neighborhood. “It’s sad her picture has been taken out of the yearbook.”

One student, who gave only his first name, Charles, said the administrative decision was “pretty messed up. Why would somebody be excluded from a yearbook?” he said. “Just because they didn’t wear a skirt?” 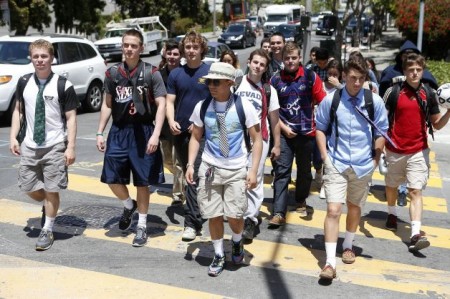 Another student, wearing a bright yellow tie, said she supported Jessica and was proud of her school. “I think it shows our school can really come together,” she said before hurrying off under the watchful eye of a school official.

Emanuel told reporters: “I support my girlfriend. I love my school, and I want to make it as good as it can be for people like us. I’d like my girlfriend to be proud of the four years that she’s been here, and I’d like it to be resolved in a way that future kids feel proud to be a Fightin’ Irish, feel proud to be who they are.”

Principal Gary Cannon said all students were part of the school’s community.

“Straight, gay, bi, transgender, all that, they’re all welcome at Sacred Heart Cathedral,” he said. “At the same time we’re going to be clear in terms of being a Catholic institution, what the Catholic Church teaches and how do we live out that faith in a meaningful way and in a supportive way with all of our students.”

Michael Urbina, 21, said earlier in the day that the school, his alma mater, simply wanted to put an “alternative picture” of his sister in the yearbook. In a statement, he said he was “extremely sad, frustrated and disappointed” by the situation. “I am embarrassed to call myself an alumni of a high school that does not equitably acknowledge, respect, value and empower all of its students.”