A second priest has defied the Church of England’s official line to marry his same sex partner. On Saturday, the Rev Andrew Cain, vicar of St James church in West Hampstead, London, posted on Facebook pictures of his wedding to Stephen Foreshew. 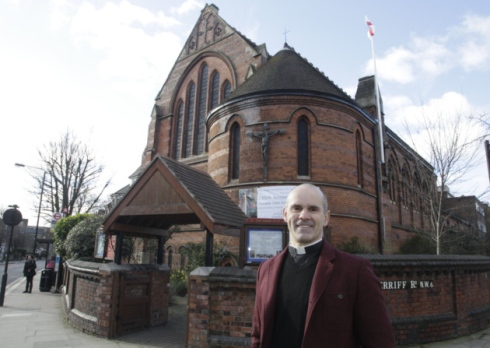 The wedding took place as the first priest to marry his partner, Canon Jeremy Pemberton, confirmed that he had been stripped of the permission to work as a priest in the diocese of Southwell and Nottingham.

Both church law and employment law offer protections. Cain, the London vicar, holds his job by the traditional freehold, which means it is almost impossible to dismiss him for doctrinal offences. If the matter goes to court, it will be difficult for the church to argue that its opposition to gay marriage is not doctrinal.

Pemberton, a former missionary, lives in one diocese but works in another, Lincoln, where he is employed as a hospital chaplain by the NHS. No hospital trust could legally sack him for his marriage. Nor does he require the permission of the bishop of Lincoln to hold the job. He is also employed as a “lay clerk” or professional singer in Southwell Minster [cathedral] but his employment there is also protected by laws against discrimination. Despite the measures taken by the church, he can still work as a priest in Lincoln and as a church singer in Nottingham.

What will be hard for both men – and for any other clergy whose same sex marriages become public – will be to find another job. The bishops have appointed the bishop of Norwich, Graham James, to maintain a blacklist of clergy who will not be considered for any future roles.

Priests in training or vicars who hold their jobs on time-limited contracts – as opposed to the older system of freehold which protects Andrew Cain – are much more vulnerable. They can be dismissed or their contracts dropped without obvious redress. Clergy are free to enter into civil partnerships, with the official justification that these need not involve sexual relations, which the church officially condemns outside of heterosexual marriage.

The wrangling over homosexuality has continued without progress for 30 years.

Most evangelicals condemn it, and a large grouping of African churches has used the Church of England’s relative tolerance as an excuse to break away from the Anglican communion. They are threatening to extend their schism to this country, with the help of a network based in an evangelical church in Battersea, south London.

To ward off the possibility of a breakaway, the archbishop of Canterbury, Justin Welby, has called for “facilitated conversations” between the two sides in this country. But while surveys show that the great majority of churchgoers are indifferent or liberal on this matter, the committed campaigners on both sides are irreconcilable and bishops are privately dismissive of the chances of reaching any agreement acceptable to hardliners.