A Vatican prosecutor on Monday ordered the trial of a former Roman Catholic archbishop accused of paying for sex with children while he was a papal ambassador in the Dominican Republic and of possessing child pornographic material. 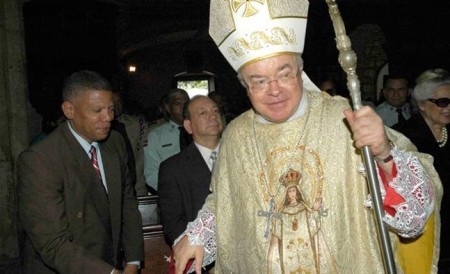 Jozef Wesolowski, a Pole who had been defrocked by a Vatican tribunal, last year became the first person to be arrested inside the Vatican on paedophilia charges.

A statement said the trial, the first on paedophilia charges to be held inside the Vatican City, would start on July 11.

It said allegations of crimes committed in the Dominican Republic were based on an investigation by police there.

The others were based on a Vatican investigation that found child pornography on his computer after he was arrested last September.

Wesolowski was recalled to Rome by the Vatican in 2013 when he was still a diplomat in Santo Domingo and he was relieved of his duties after Dominican media accused him of paying boys to perform sexual acts.

The former archbishop, who later lost his diplomatic immunity, could face up to 12 years in jail, the Vatican said at the time of his arrest.
Complete Article HERE!