The Bishop of Chur, Vitus Huonder, has apologized to gay people after citing controversial Bible passages in a speech he gave at a Catholic forum in Germany at the end of July.

The bishop, well known for his ultra-conservative views, kicked up a storm when he quoted passages from the Old Testament saying that homosexual behaviour was an “abomination” and should be punished by death. 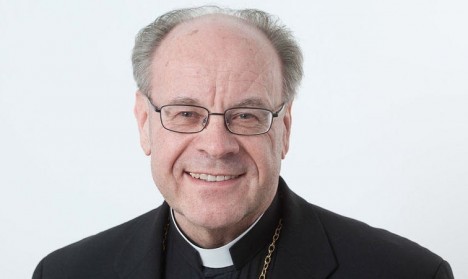 In a three-page letter sent to 800 of his colleagues, including priests and employees, on Wednesday night, Huonder apologized “to everyone who felt injured by my speech, in particular those of homosexual persuasion”, reported Swiss news agency ATS on Thursday.

The 73-year-old said it was a “mistake” to write his speech purely “on a theological and academic level”.

He also regretted writing it during the summer holidays when there was no one around to read it over for him, reported ATS.

“My colleagues would have drawn my attention to the danger,” he said.

On Monday Swiss Gay Federation Pink Cross filed a criminal complaint against the bishop for his comments, saying that he was indirectly “inciting people to crimes” with his remarks.

A private individual from St Gallen has also filed a complaint.

If the bishop is found guilty he risks up to three years in prison.

Contrary to politicians and judges, bishops are not immune from prosecution.