Pink Cross, the umbrella association for Swiss gay groups, has filed a criminal complaint against Vitus Huonder, the Catholic bishop of Chur, for “homophobic comments” made in a recent speech in which he quoted bible verses calling for gays to be put to death.

The lawsuit was handed in to the public prosecutor of canton Graubünden in eastern Switzerland on Monday. In addition, the Swiss News Agency said a private individual living in canton St Gallen had also filed a complaint against Huonder on Monday.

Pink Cross, backed by the Swiss Lesbian Organisation, accuses 73-year-old Huonder of “inciting people to crime or violence” with his remarks made at a religious forum in Germany on August 2.

If found guilty, Huonder faces up to three years in prison.

In his 50-minute address on marriage, the bishop quoted two verses from the book of Leviticus, including Leviticus 20:13: “If a man also lie with mankind, as he lieth with a woman, both of them have committed an abomination: they shall surely be put to death; their blood shall be upon them.”

In response to applause, he continued: “Both of these passages alone suffice to clarify unambiguously the church’s position on homosexuality”.

Following a public outcry, Huonder released a statement in which he regretted that his comments had been misunderstood and interpreted as contemptuous towards homosexuals. “That wasn’t my intention,” he said.

This wasn’t good enough for Pink Cross director Bastian Baumann, who said Huonder had repeatedly made clear that he interpreted the passages literally.

Baumann said the call for the “reintroduction of the death penalty for gays” had forced the group to seek criminal prosecution. 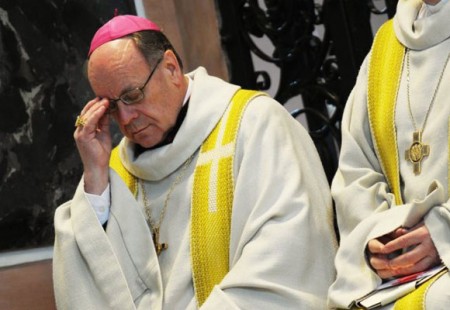 “As a figure of authority within the church, Vitus Huonder accepts that his demand will meet with approval among Christians and other fundamentalists and could be followed obediently,” he said.

Baumann said the “defamation of gays by the church” could be tolerated to a certain extent, but the bishop had now crossed a “red line”.

Some members of the Catholic Church have distanced themselves from Huonder, with Markus Büchel, the bishop of St Gallen, saying people should not be reduced to their sexuality.

“What we know today about homosexuality – that it is a predisposition and not a freely chosen orientation – was not known when the Bible was written,” he wrote to parishioners.

Nevertheless, Büchel still opposes church blessings of same-sex couples, believing they go against the church’s view of marriage as a sacred union between a man and a woman.

Huonder is no stranger to controversy, having previously opposed issues including women priests and sex education. He believes parents should have the right to have their children exempted from sex education classes in school and that divine law comes before human rights.

Earlier this year Huonder called for a Swiss priest who had blessed a lesbian couple to be sacked.

The priest kept his job after apologising to Huonder for causing him any “inconvenience” and promising not to bless any more gay couples.