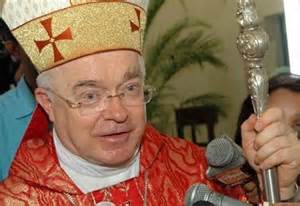 Jozef Wesolowski, a former archbishop and Vatican envoy to the Dominican Republic, has died before he could be tried for child sex offences.

He had been taken ill just before the start of his Vatican trial in July.

He was accused of paying for sex with children in the Dominican Republic.

Wesolowski, 66, would have been the first high-ranking church official to be tried on paedophile charges. His case was seen as a test of the Vatican’s pledge to stamp out abuse.

Last year, the Pope compared the actions of those who commit such crimes to a “satanic mass”.

Wesolowski was reportedly found dead early on Friday morning. A Vatican statement (in Italian) said preliminary indications were that he had died of “natural causes”.

Wesolowski was charged with abusing children in the Dominican Republican between 2008-13.

He was also charged with possession of child pornography, dating from his return to Rome in 2013.

He was due to have been tried under a new court system, set up by Pope Francis, to try clerics and employees of the Church who have been accused of exploiting minors.

If convicted, he could have faced between six and 10 years in jail.

Wesolowski had already been convicted over abuse by a church tribunal and defrocked as archbishop.