The author of That Undeniable Longing: My Road To And From The Priesthood, Mark Tedesco, contacted me through this site and asked if he could send me a copy of his memoir in hopes I’d be able to review it. I was glad to make his e-acquaintance and said; “by all means, do send me a copy.” 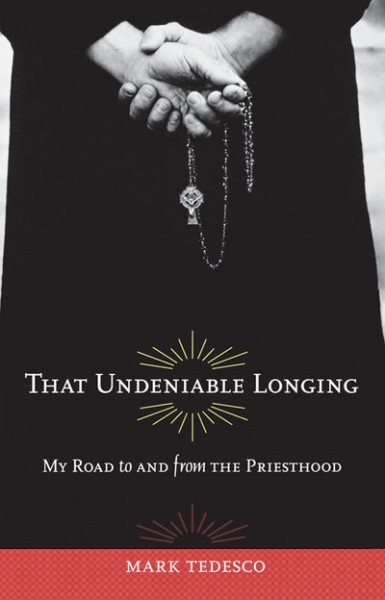 First off, I was surprised to discover that the book was published way back in 2006. Where have I been? I had to ask myself. I try to stay on top of such things, but I totally missed this one.

Mark’s road to and from the priesthood begins with him leaving his home in California in 1978 at the age of nineteen to enter a seminary with the Oblates of the Virgin Mary on the outskirts of Rome. My own road to the priesthood began ten years in 1967 at age 17 when I left my family in Chicago to enter college seminary in Northern Illinois with the Oblates of Mary Immaculate. I was a novice by age 19.

Mark didn’t stay with his Oblates: they asked him to leave after a couple of years. But, after a short hiatus back in California, Mark returned to Rome as a seminarian at the North American College, one of the most eminent seminaries in Rome. He was ordained in 1988 and served the church as a priest until 1994. I was ordained in 1975. I was a member in good standing in my religious community until 1981. At which point I had completed my post-graduate studies with my dissertation on the sexual attitudes and behaviors for gay Catholic priest in the active ministry. The ensuing media attention associated with my dissertation and my public coming out brought my public ministry to a halt. My subsequent 13-year battle with the Oblates to preserve my priesthood and ministry ended the same year Mark left the priesthood, 1994.

Despite the differences in our stories I think the dovetailing is rather remarkable. And Mark’s reminiscences were very familiar territory to me. The struggles Mark recalls of his efforts to wed his spirituality with his burgeoning sexual awareness mirrors precisely the turmoil I encountered when I interviewed the 50 gay priests for my doctoral thesis. It mirrored my own story too.

I read That Undeniable Longing thinking, my goodness, another story of a super talented man, one with so many gifts, one that clearly had a vocation to serve God’s people, but one who had to choose between ministry and personal integrity. Why, I had to ask myself, why is this still going on? Why does the Church continue to sacrifice its faithful sons on an altar of an outmoded sexual morality based on a woefully deficient understanding of human sexuality?

To his credit, Mark is not bitter as he looks back on his priestly formation and active ministry and toward his new life as a layman.

“How did I arrive at this point? Could I ever have imagined, long ago on a winter day in Rome, that I would find myself on this new path, my dreams not shattered, but transformed? And that elusive, relentless desire, for happiness – where is it leading me?”

That Undeniable Longing is not an angry book, though God knows, it could have been. Notwithstanding Mark’s emotional struggles, which at times manifested themselves physically, his attitude and his lack of recriminations at the end of his priestly dreams are very refreshing and, I believe, they are the heart and soul of the book.

The author details his involvement in a conservative lay Catholic cult with Italian ties that he calls the Community and Freedom (CF). I’m guessing this is a thinly veiled Community And Liberation. But, as they say, a rose by any other name smells the same. Sounds to me like extricating himself from CF was as traumatic as leaving the priesthood.

After some soul-searching and with the help of a counselor, Mark, who was by now in Washington DC, left the priesthood and moved back to California to start a career as a teacher.

Mark doesn’t go into much detail on his process of discernment regarding his being gay vis-a-vis his priesthood. I would have liked him to have spelled out that more. It would be helpful for other gay priests still weighing their options. Even though Mark mentions that he had deep emotional (love) attachments to some of his confrères, he never goes into detail. Did he act upon his attractions? He doesn’t say. But I remain curious. Not for the prurient interest, mind you, but because how we behave is how we learn. That being said, the fact that Mark went through this ordeal, dealt with all the oppressive and sex-negative Catholic culture has to offer, and came out the other side in tack, is a testament to his character. Not everyone who attempts this is successful.