By Aap and Belinda Grant Geary and Emily Crane

Cardinal George Pell has questioned whether a priest with knowledge of sex crimes against children has a civic obligation to report it after he described the prolific sexual abuse of children at a Victorian parish ‘a sad story’ that ‘wasn’t of much interest’ to him.

Cardinal Pell, who was a Ballarat priest at the height of pedophile Gerald Risdale’s offending, has presented evidence to the royal commission into child sex abuse from Rome, stating he was not aware of the notorious pedophile’s behaviour in the 1970s and 1980s.

When questioned about his obligation to speak out against crimes like those perpetrated against a number of children in the Ballarat diocese Cardinal Pell said members of the church who were aware would have been morally obliged to report it but questioned if that decision was expected by law.

‘I’m not sure that he would morally escape such an obligation, but I am not sure at that stage there was even a civic obligation to report such a crime,’ he told the commission on Tuesday via videolink. 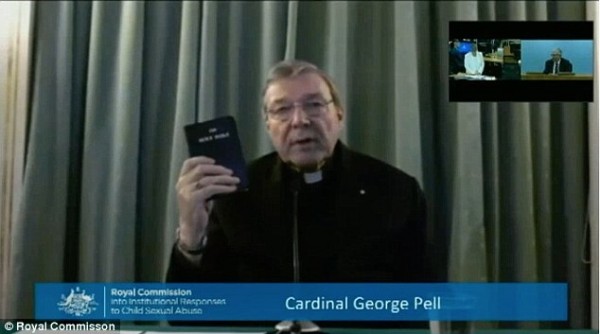 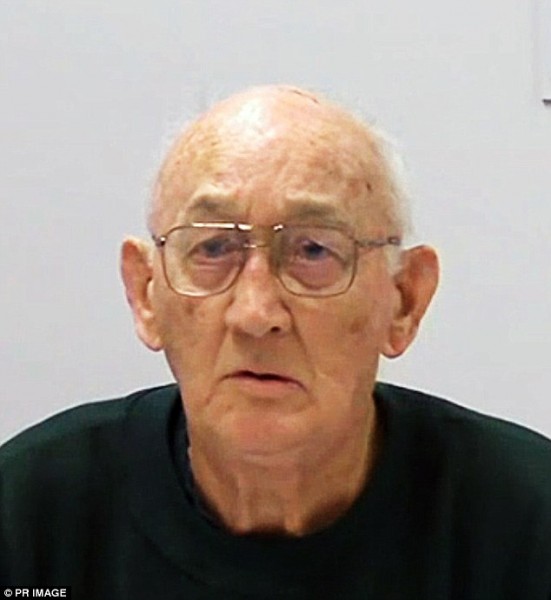 Earlier that day Cardinal Pell described the abuse taking place in the Victorian parish of Inglewood in 1975 as a ‘sad story’ that was not of much interest to him at the time.

‘The suffering, of course, was real and I very much regret that but I had no reason to turn my mind to the extent of the evil that Ridsdale had perpetrated,’ Dr Pell said.

His comment drew gasps from some observers in the room, many of whom were victims of child abuse who had travelled to Rome to hear his testimony.

Cardinal Pell has denied having any knowledge of the widespread abuse, noting on Tuesday that he was not aware that Risdale had a teenage boy living with him in 1982, despite a number church officials being aware of the grossly inappropriate ‘co-habitation’

Paul Levey previously told royal commission that he was abused by Risdale ‘just about every day’ after he was sent to live at the presbytery at Mortlake for six months around Easter 1982.

Mr Levey slept in the same room as the pedophile and claimed it became common knowledge he was living there.

During his second day before the commission, Cardinal George Pell said he did not know about Mr Levey’s living arrangements even though by then he was privy to the ‘scandalous’ rumours about Ridsdale from his time in Ballarat during the 70s.

He said that at the time he was travelling at lot as he was working as director of Melbourne’s Aquinas College and was also principal of the entire institute of Catholic education which meant he had thousands of children to oversee.

‘I certainly was not plugged into the life of the diocese like someone who would be working full time in parishes,’ he said.

Counsel advising the commission Gail Furness, SC, pointed out to him that clergy with whom he was acquainted knew of the arrangement.

Mr Levey’s mother and a nun had also raised the issue with Ballarat Bishop Ronald Mulkearns.

The cardinal insisted he did not know until much later, perhaps in the 90s, but had he known he would have thought it was ‘most unusual, even if there was a resident housekeeper’ with ‘common sense’.

He said he would have been concerned for the safety of the boy as it was ‘imprudent’ for any priest to do so.

He questioned if he or any other advisors had ‘the power’ to withdraw the boy – stating that members of the church are often surrounded by ‘real constraints’ and that ‘nobody can do the impossible’.

Cardinal Pell went on to say that at the time people were reticent to talk about such things.

Commission chair Justice Peter McClellan asked him if being reticent implied people had knowledge but did not talk about it but Cardinal Pell said he was not suggesting that.

Cardinal Pell did admit that the Catholic Church leadership failed to protect children in the Ballarat Diocese but accepted no responsibility for moving Risdale to Mortlake as he was ignorant of the offending by Risdale despite a number of complaints being made.

‘In the diocese of Ballarat certainly there was a gigantic failure of leadership,’ Cardinal Pell told the child abuse royal commission from Rome.

The commission heard that between 1977 and 1984 Pell had been working as an advisor to the Bishop Mulkearns who headed the Ballarat diocese in the 1970s and 1980s when Ridsdale was repeatedly assaulting children. Cardinal Pell told the commission Bishop Mulkearns was ‘reprehensible’ in ignoring complaints about the notorious pedophile priest.

‘His repeated refusal to act is, I think, absolutely extraordinary,’ Dr Pell told the commission via video link from Rome.

Ms Furness SC, counsel assisting the commission, described how one woman complained to Bishop Mulkearns about Ridsdale and ‘he just sat there and stared at us’.

He said Bishop Mulkearns told his advisers that Risdale had to be removed from the Mortlake parish in a meeting in September 1982 but said pedophilia was never mentioned at the meeting.

There was no reference to sexual misconduct with minors,’ he said.

Cardinal Pell said he knew nothing about Ridsdale’s pedophilia, stating that there were other priests who moved frequently and that it had not appeared suspicious given those circumstances.

Ms Furness SC said three of the seven advisers at the September 1982 meeting knew it was necessary to move Ridsdale because of sexual complaints against him and it was implausible that the others were not told why.

Cardinal Pell responded: ‘It would only be implausible if there was evidence that they had been told in some way or other.’

After reviewing minutes of the meeting, Ms Furness suggested that if three other consulters were aware it was ‘implausible’ that Cardinal Pell did not understand why it was necessary to move Risdale.

The cardinal told the child abuse royal commission on Monday night that while he was on a Ballarat diocese committee that advised on the transfers of priests he was never told of the offending of pedophile priest Gerald Ridsdale in the 1970s.

By videolink from Hotel Quirinale in Rome he told the commission sitting in Sydney that then Ballarat bishop Ronald Mulkearns and his advisor Monsignor Fiscalini had deceived him by not telling him Ridsdale was moved between parishes because of his offending.

Ridsdale was able to continue his offending as he was shifted from one parish to another as ‘talk’ began among parishioners about his interfering with children.

His nephew David Ridsdale, who was sexually abused by his uncle, is among a group of survivors hearing the cardinal’s evidence in Rome and told reporters it appeared the Catholic Church was behaving ‘with lies and deceit’ within its own structure.

He said he assumed Victorian Police would be taking up the matter in relation to church officials moving pedophile priests to parishes where they could continue their offending.

‘Cardinal Pell is a very astute, a very bright man so how can he say he didn’t know?

‘He is the one putting the accusations back on his superiors that they lied and deceived.’

Mr Ridsdale said Cardinal Pell was ‘either culpable or an ignorant buffoon’.

‘I don’t believe he’s the latter and we have no evidence of the former so we have to wait for the commission to do its job.’

Ms Furness said it was incumbent on Cardinal Pell to ask Bishop Mulkearns why Ridsdale was being moved yet again but Cardinal Pell said he was happy to take the bishop’s word that it was necessary.

She asked Cardinal Pell if he thought Bishop Mulkearns was ‘just one bad apple, as it were, within the Catholic Church’, to which he replied that he could nominate another Bishop whose actions were just as ‘grave and inexplicable’.

The cardinal was questioned about whether the role of the bishop in the structure of the church meant his conduct wasn’t challenged.

‘The authority of the bishop is very powerful and especially in climates where free discussion is not encouraged, and where information is kept very tight,that these abuses were able to go on,’ Dr Pell said. Ms Furness SC said all parish priests, assistant priests, advisers and consultors collectively failed to protect children, but Cardinal Pell said that was a vast and misleading overstatement.

Cardinal Pell said a universal failure would mean that everybody knew.

‘A collective failure would be that primarily those with effective responsibility knew and did not act.

‘For those who were ignorant, I think it is improper to impute responsibility to them.’

He told the commission that he excluded himself from that moral responsibility as he had been ignorant of the complaints against Ridsdale.

When asked if he accepted any responsibility at all for Ridsdale being moved between parishes during the time he was a consultor, Cardinal Pell said he did not.

The commission heard that Bishop Mulkearns knew about complaints against Ridsdale when he moved him between parishes but Cardinal Pell said he was not told about it during his time as an adviser to the bishop from 1977.

Cardinal Pell said the bishop and senior cleric Monsignor Leo Fiscalini deceived him and other advisers at meetings which discussed moving Ridsdale, whose offending was common knowledge in at least two parishes. Commission chair Justice Peter McClellan said Cardinal Pell would be held to be culpable if he, like Bishop Mulkearns, knew about the offending and did not act. The Cardinal stated that he found it unacceptable Ridsdale was moved between parishes, including to Inglewood in 1975, after receiving a victim’s complaint.
‘It’s unacceptable because of the risk it presented to children in Inglewood and that was exacerbated by the fact it doesn’t seem as though any effort was made to withdraw Ridsdale, at least for a period, for counselling or advice or help,’ he said. Ridsdale was the parish priest at Apollo Bay in 1974 to 1975 but put in for a transfer in February 1975 after a man told him there was pub talk about him and children. He went to Inglewood, where he left overnight in 1975 after a policeman complained about him interfering with his son.

Cardinal Pell said moving Ridsdale was unacceptable and at the time the view would have been that he should have been at least sent for counselling as a minimum step if a bishop knew it was a first offence.

‘These were different times with different sets of predispositions,’ Cardinal Pell said.

‘But whatever the predispositions, it’s unsatisfactory. The cardinal told waiting media earlier in the day that he had ‘the full backing of the Pope’ after a weekly meeting with him earlier in the day. Cardinal Pell is making his third royal commission appearance from Rome because of medical advice he should not fly to Australia.

During his first day of questioning he told the commission that he had heard rumours of pedophile priests and suspected a Christian Brother of ‘pedophilic activity’ in the 1970s but insists he had no authority to act. Cardinal Pell also admitted he heard gossip in the early 1970s about Mildura parish priest Monsignor John Day being accused of pedophile activity. He described Mulkearns’ handling of Ridsdale as a catastrophe for victims and the church and admitted the church had made enormous mistakes.