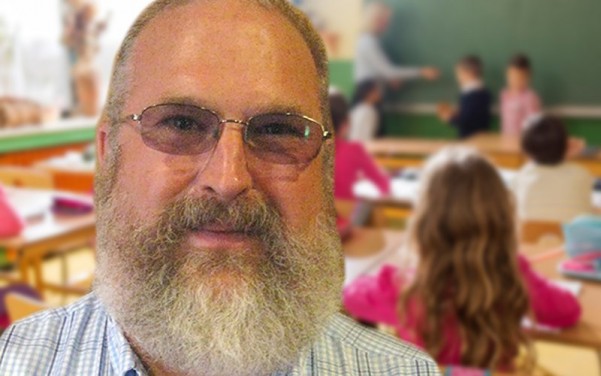 The principal of a tiny Seventh-day Adventist school in Washington state has been arrested for allegedly molesting and abusing two young girls.

The principal of a tiny Christian school in a small Washington town has been charged with sexually assaulting two female students. Prosecutors say Douglas J. Allison, 55, even claimed that one of the young girls asked for it.

Allison was the principal and one of just two teachers at the Mountain View Christian School, a Seventh-day Adventist school that has just a dozen students. He is charged with raping and sexually assaulting a 10-year-old girl and her classmate, who came forward during the investigation.

Seventh-day Adventists are a Christian denomination who believe Christ’s return to Earth is imminent. Unlike most Christians, they observe the sabbath on Saturday.

The denomination was founded in 1863 and has more than 18 million members worldwide, including former Republican presidential candidate Ben Carson.

And the church has built more than 8,000 schools, like the one run by Douglas, around the world. His wife, Judy, who is not under investigation, was the school’s sole other educator.

The Mountain View Christian School’s website has since been suspended, but a cached version shows it billed itself as one “committed to providing quality education in a Christ-filled environment.”

“The Mountain View Christian School family exists to show children Jesus, nurture their love for Him and others, teach them to think, and empower them to serve,” the website read. “We believe that true education develops the spiritual, mental, and physical powers of each student.”

Court documents say that what occurred at Allison’s school was far from holy.

According to an affidavit filed in court, the mother of the 10-year-old was alerted to the alleged abuse by a cousin who attended the same school. The cousin told the alleged victim’s mom that she had “witnessed the teacher tap [Child 1’s] butt, and that it made her uncomfortable.” When the mother asked her daughter about it, she said Principal Allison, known to kids as Mr. A, “had been touching her privates every day at school.”

The document says the girl told Allison to stop it, but he continued to touch her. The girl’s two brothers, in the same classroom, told their mother they hadn’t seen this happen, but the girl said the abuse had been happening every day since the start of fourth grade.

When a detective interviewed the cousin who initially reported the inappropriate touching, she said she’d seen the second alleged victim, aged 11, sit under Allison’s desk and play with his cellphone while the teacher sat at his desk. “She has seen [Child 2] sit under Mr. A’s desk all day long with his cell phone,” interview notes in the complaint read. “About two weeks ago [the cousin] saw [Child 2] sitting on Mr. A’s lap at school.”

“During the ensuing investigation, detectives discovered a second victim, an 11-year-old female student at the school,” the Clallam County Sheriff’s Office said in a press release. “The second victim disclosed to Detectives she had been sexually assaulted in similar fashion by Allison.”

The 11-year-old alleged similar over-the-pants inappropriate touching of her genitals. On one occasion, she said, the teacher showed her the Urban Dictionary definition of the word “ulus” on his phone.

The Dictionary.com definition of the word refers to a traditional knife used by Eskimo women. On the Urban Dictionary website, however, the word is defined as the scientifically impossible “large penis that has been inserted into an anus, so deep and for such a long a period of time, that the penis is partially digested.”

According to the complaint, the 11-year-old’s mother called Allison and allowed police to listen in on her conversation with the principal. When she confronted Allison with the girl’s allegations, the principal allegedly admitted to touching her and said he was under investigation. He said he touched the girl “only a few times,” the complaint alleges. It adds that Allison said he “touched her where she asked” him to.

“She asked you to touch her vagina?” the mother asked.

“Yes, she did,” the teacher allegedly replied.

In a later conversation with police, which was videotaped after his arrest, Allison allegedly confessed to touching the girls over their clothing and digitally penetrating one of them while the class was studying. He also allegedly confessed to making the 11-year-old touch his genitals and let him place his penis in her mouth.

Allison is charged with 12 counts of child molestation and child rape, according to court documents.

The school was still advertised on the Sequim Seventh-day Adventist Church’s website Sunday. An associate pastor who teaches a once-weekly Bible study at the school told KOMO News that the church is “very, very sad.”

“Our congregation is grieving. We love our kids, we love our families. We’re praying for complete healing, for complete justice,” Collette Pekar said. “All humans have the potential to do horribly awfully things and just the realization that these things can happen is overwhelmingly sad.”

Calls made to the school number listed on the site were not returned.

“Mr. Allison is a schoolteacher of minor children, and the allegations are that he molested and potentially raped children in front of his class while other children were watching,” prosecutor Michele Devlin told the judge at Allison’s bond hearing. “He is a danger to any other child out there.”

The judge set Allison’s bond at $100,000. It’s not immediately clear whether Allison had an attorney.

A spokeswoman for the Seventh-day Adventist church said Allison was put on leave as soon as the allegations surfaced. “We are taking care of our students by putting in respected and trusted teachers to take over the teaching responsibilities, and providing counseling and care for families that have been affected,” Becky Meharry said.

But when detectives spoke to school officials about the investigation, the chairman of the board, John Gatchet, allegedly said he’d already had a conversation with Allison about not touching students after a parent complained about Allison putting his arms around kids and hugging them earlier in the school year.

A woman who answered the phone at a number listed for Gatchet said he was not available and hung up. Subsequent calls were unanswered. Archie Harris, the school’s superintendent, did not return a request for comment.

But not everyone in the community was quick to distance themselves from Allison.

“As a Christian, God loves the sinner but hates the sin,” Greg Reseck—a teacher at another Seventh-day Adventist school in Port Townsend—told King5. “But even if he’s convicted, I will still consider him my friend.”