A Catholic priest who shot himself in the head after he was accused of molesting a young boy left a chilling suicide note in which he claims he took his own life as ‘a final gift’ to anyone he ‘might have hurt’. In the note – which appears to be a veiled admission of guilt – Father Virgilio Elizondo, 80, said he had lived a life ‘totally dedicated to serving others’. 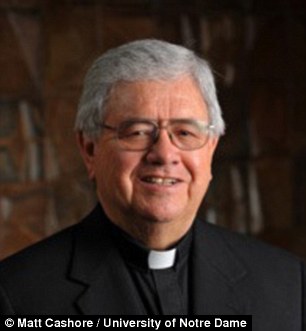 The Notre Dame professor left it near where his body was found, at his San Antonio, Texas, home. Apparently unconcerned by the feelings of his alleged victim, he thanked God for his entire life – ‘especially’ his 52 years of priesthood – during which time his accuser claims Fr. Elizondo sexually assaulted him when he went to him to report abuse by another priest.

The letter – obtained by Daily Mail Online – goes on to describe how Fr. Elizondo felt ‘fatigued and empty’ and was suffering various ailments affecting his kidneys, eyes and knees. Elizondo committed suicide – does the priest ‘beg forgiveness and mercy from those he has hurt or offended.’ Last night the lawyer representing Fr. Elizondo’s alleged victim called priest self-serving and manipulative.

Attorney Thomas J. Henry told Daily Mail Online: ‘His comments about hurting others that he has offended and wanting forgiveness really appears to be not a suicide note but an apology note for his conduct. ‘I think that he takes accountability in a vague way and in a very odd way calls his suicide a farewell gift – a gift to anyone he may have hurt. ‘But those statements are self-serving in the sense that a farewell gift in the face of hurting other people by killing yourself is not what we would think would be appropriate unless the severity of hurting others was so much you felt you had to do this. ‘I think that he has taken a way out that is not responsible in the least with regards to addressing these allegations. 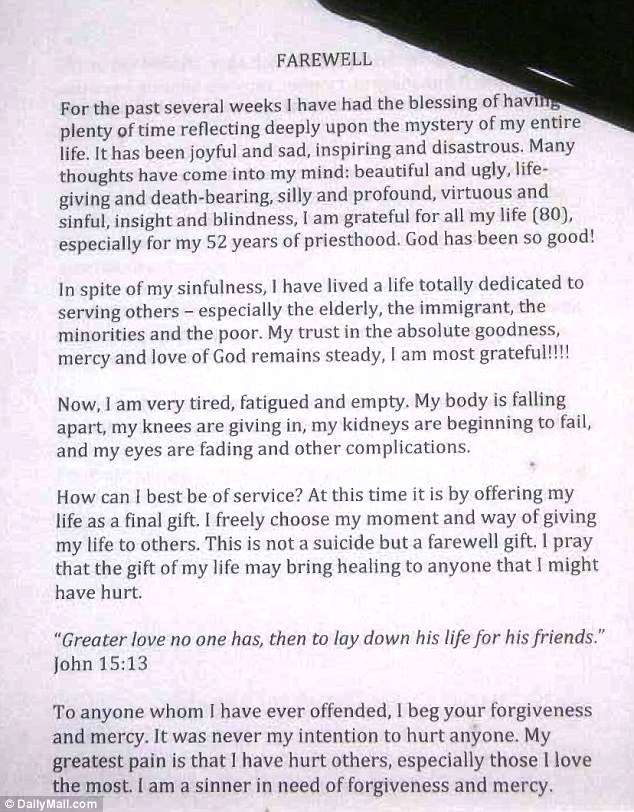 ‘In his position he should have willingly provided sworn testimony about his conduct over the course of time he was a priest. ‘I don’t think saying he took the easy way out is how I would characterize this as much as a manipulation to avoid answering serious questions.’ Fr. Elizondo was found dead from a single self-inflicted gunshot wound inside his home on Monday, according to San Antonio police.

The once respected religious leader and theologian had been embroiled in controversy since last May, when an orphan named only as John Doe filed a lawsuit in which he accused the aging cleric of molesting him when he went to him in 1983 to report sexual abuse by another priest named Father Jesus Armando Dominguez. Fr. Dominguez, who is currently a ‘fugitive from justice’ believed to be in Mexico, according to Henry, molested and performed sex acts on the boy for around two years from 1980 at a local orphanage.

When Fr. Dominguez left the orphanage, the boy tried to report the abuse to Fr. Elizondo but instead of listening ‘he began to fondle the Plaintiff’s genitals, taking advantage of the same sexual liberties Plaintiff complained of with Father Dominguez,’ according to the lawsuit.

Although Fr. Elizondo denied the allegations when he was alive – his suicide note appears to suggest his guilt.